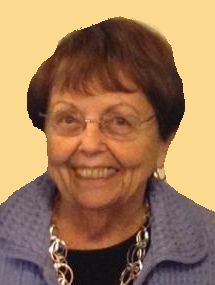 After a long and happy life, Jean Ann Schuchart passed away on December 23, 2016 — just two days before the birth of our Savior. Jean was born on January 15, 1928 in Appleton, Wisconsin to Eugene and Anna (Finnegan) Walsh. Jean met the love of her life, Richard (Dick) Schuchart, while working for Outagamie County Extension and they were married on August 3, 1959. They moved to Dick's hometown, Marinette, WI, in 1967 when Dick accepted a new job as a Parole and Probation Agent for the State of Wisconsin.

While she and Dick were raising their three teenagers and a three year old child, Dick became ill and passed away. Jean was forever grateful for the loving support of the many relatives and friends surrounding the family. In 1979 while her older children were attending college, Jean and her young son Tom, moved back to her hometown Appleton where she remained living independently in her own home until three months before her passing. A very humble, kind, and rather quiet person, Jean was a beloved wife and mother who treasured her family, her Catholic faith and her Irish roots.

Jean waited patiently for grandchildren. They finally arrived one by one over a period of 19 years. She cherished all 8 of them. Her home served as our family hub for decades of birthday and holiday gatherings—all of which included a great deal of laughter and shenanigans.

Jean graduated in 1946 from Appleton High School and attended Lawrence University and the Milwaukee Business School. She was a secretary for the Institute of Paper Chemistry and the Outagamie County Extension. She also helped in the background as her sister Margaret launched the area's first telephone answering service, Tel Sec. When Jean's children were older, she worked part-time as a bookkeeper for Tel Sec and for her son Rick's company Tel/Com. Jean also volunteered for 12 years at LEAVEN and at St. Mary Church.

She was a member of the Laetare Book Club, several bridge clubs, and enjoyed monthly luncheons with the “'46 Chicks.” She visited friends who were ill, played cards whenever she could, enjoyed the birds outside her kitchen window, and was an avid reader. Her children knew not to call her during Jeopardy and Wheel of Fortune. Jean loved traveling and especially loved her trip to Ireland with son John. She treasured spending time in Door County and wintering in Naples, FL with son Rick for many years. She always loved visits to Marinette and to her son Tom's cottage in Crivitz in recent years. Playing Spite and Malice and a Rummy game were always a must-do during visits with her daughter Ann.

The funeral liturgy for Jean will be held at 11:00 a.m. on Saturday, January 14, 2017 at St. Mary Catholic Church, 312 S. State Street in Appleton, with Fr. Bill Swichtenberg officiating. Inurnment will take place beside her beloved husband, in Marinette, at a later date. Friends may call at the church on Saturday morning from 9:30 AM until the time of the funeral mass. Online condolences may be offered at www.wichmannfargo.com. A luncheon celebration will follow the funeral mass.

Mother had a special place in her heart for homeless people so in lieu of flowers, memorials may be sent to any of the following: Homeless Connections, LEAVEN or COTS. Our heart-felt appreciation to all of the unsung heroes who helped guide Jean on her journey, including the medical staff at St. Elizabeth Hospital (especially Fremont Tower 3rd floor), Affinity Clinic and Cardiac Care staff, Southern Care Hospice, St Mary's Parish, and especially the caring and loving staff at Peabody Manor.