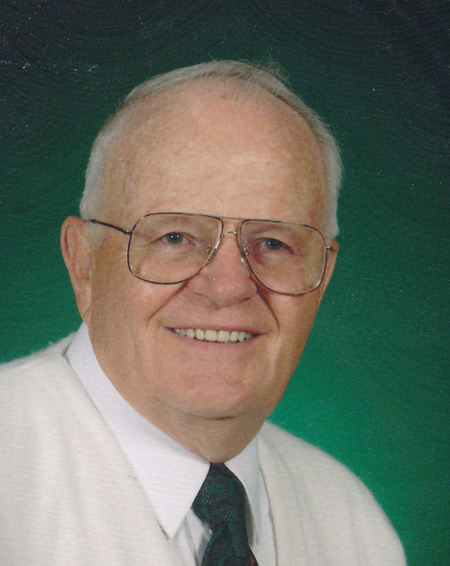 Jay Parish, age 89, of Appleton, passed away at home on Saturday, July 27, 2013, surrounded by his loving family. He was born on December 2, 1923, to the late Harold and Emily (Johnson) Parish, and he resided in Appleton. Jay proudly served his country in the U.S. Army and served during WWII. He was a Master Jeweler and Professional Engineer. Jay worked for twenty-seven years at Wisconsin Bell Telephone Company as an Outside Plant Engineer before retiring. After retirement, he and his family owned Appleton Trophy and Engraving where he worked for ten years, and he was proud to pass the business onto his sons. On June 29, 1946, he married the late Carol Marschall, and they shared 38 years of marriage. Along with their many memories , they had five children, fifteen grandchildren, and twenty-seven great-grandchildren together. On October 8, 1999, Jay married Barb Prindle, and they shared thirteen years of marriage. They loved camping and traveling together, and treasured the winters they were able spend in Arizona. Jay belonged to Masonic Lodge #349, Beja Shriners, Harvey Pierre Post #2778, and the VFW. He additionally belonged to the Sons of Norway, Noon Hour Lions, and was on the board of directors at the Y.M.C.A.

He was preceded in death by his parents, Harold and Emily Parish; sister, Geraldine Parish; wife, Carol Parish; and Aunt Gladys Klein.

A memorial service for Jay will be held at 12:00 p.m. on Tuesday, July 30, 2013, at the WICHMANN TRI-COUNTY CHAPEL, 3212 S. Oneida Street, Menasha, with Rev. John McFadden officiating. Visitation will be held at the Funeral Home from 10:00 a.m. until the time of service.