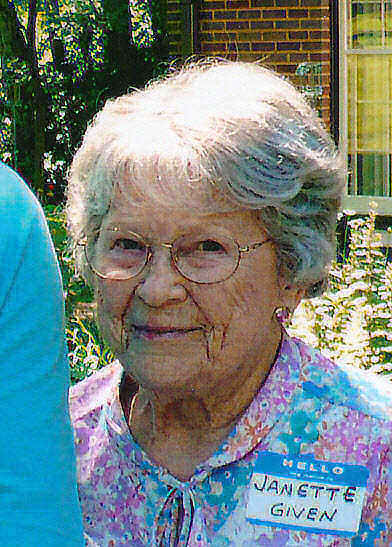 Janette Given, age 93, passed away on Saturday, July 21, 2012, at ThedaCare Hospice Residence. Janette was born on August 7, 1918 in Lake Linden, Michigan, daughter of the late Joseph and Elsie (Le Page) La Fond. She attended St. Joseph Catholic School and graduated from the Appleton Senior High School in 1936.

Janette loved music and started her musical studies at age eleven, playing the cello, mandolin, and violin. Following her graduation, she worked part-time at Wisconsin Telephone Company, continued her violin studies with Professor Percy Fullinwider at the Lawrence College Conservatory of Music and played in the college orchestra. Janette has been a violinist with the Lawrence University, Green Bay, and Fox Valley Symphony Orchestras. However, she was happiest when playing as a part of a string quartet. She retired her violin after playing for nearly seventy-five years.

In 1942, Janette joined the Wednesday Musicale, a local music club that met to study and perform classical music. She was a performing member for twenty-five years and an honorary member for the past forty-five years.

Janette married Carl Given on June 20, 1940 at St. Joseph Catholic Church in Appleton. She met Carl when they were both musicians with the former Appleton Symphony, where Carl played trumpet.

Janette was a charter member of St. Bernard Catholic Church and a member of the Fox Valley Symphony League. After Carl's death in 1988 she was a “Pink Lady” volunteer at the Appleton Medical Center and a life member of the hospital auxiliary.

A Mass of Christian Burial will be held at 11:00 a.m.on Tuesday, July 24, 2012 at ST. BERNARD CATHOLIC CHURCH, 1617 W. Pine St., Appleton, with Fr. Dennis Ryan officiating. Friends may call on Tuesday at the church from 9:30 a.m. until the time of the mass. Interment will be at the St. Joseph Cemetery where Janette will join Carl in her final resting place.
In lieu of flowers, memorial contributions in Janette's name may be directed to the Xavier/ACES music program, to Leaven, Inc., or to a charity of your choice.

The family would like to extend a special thank you to the Hospice staff, family, and friends for your prayers and loving support. May God hold each of you in the palm of His hand.

We pray the angels in Heaven will share their harp “strings” with Janette.