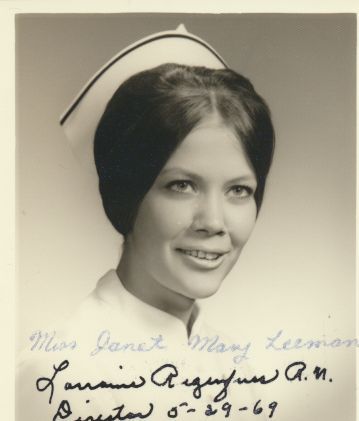 Janet was born in Crystal Falls, Michigan on February 16, 1948, daughter of the late Monroe and Veronica (Hendricks) Leeman. As a small girl, the family moved about, and she resided in Channing, Michigan, Green Bay, and Oneida. Janet was a 1969 graduate of the Holy Family School of Nursing, and on September 19, 1970 she married Eugene T. Van Boxtel in Marinette; he survives. Since their marriage, the couple has lived in Manitowoc, Milwaukee, Appleton, Freedom, but for the last many years have been back in Appleton, with the exception of a six-month visit to Hawaii. In 1985, she received a Bachelor of Science degree in Health Arts from St. Francis College in Joliet, Illinois. Janet worked in various areas within the nursing profession, including intensive care, neo-natal intensive care, chemical dependency, home care, institutional nursing, and telephone triage. Though she was proud of her nursing career; Janet always considered her greatest mission was that of being an excellent mother and grandmother. She also enjoyed pottery and felting and was named artist of the year at UW Fox Valley in 2000.

The funeral liturgy for Janet will be held at 10:30 AM on Friday, September 27, 2013 at ST. JOSEPH CATHOLIC CHURCH, 410 W. Lawrence St with Fr. Jim Leary OFM. CAP. officiating. Interment will be in the St. Joseph Catholic Cemetery. A time of visitation will be held on Friday from 9:00 AM until the time of the service at the church. Online condolences may be expressed at www.wichmannfargo.com.

The family would like to extend a sincere thanks to the staff at Cherry Meadows, nurses Mary and Katie from Theda Care Hospice and Dr. Whiteside and Dr. Swanson.