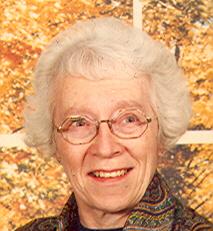 Janet F. Ruth, age 86, of Appleton, died Sunday evening, May 21, 2006. She was born July 29, 1919, to the late Percy and Nettie (Steninger) Fullinwider, in Neenah and had been an Appleton resident all of her life. Janet graduated from Lawrence University, Magna Cum Laude, with a degree in Latin. She married Melvin R. Ruth July 3, 1943; he preceded her in death on May 23, 1996. Janet was a very fine musician and artist and she composed musical pieces. Janet was a life long member of First United Methodist Church, where she was a member of the Deborah, Mary, Martha Circle, United Methodist Women, and sang in the choir for 50 years, she was a member of Alpha Delta Pi Sorority, P. E. O., Pythian Sisters and a community volunteer. She is survived by two daughters, Carole J. Ruth, Vernon, British Columbia; Alice A. Ruth, Appleton; two grandchildren, Jennifer M. and Ian M. Houldsworth; two great grandchildren, Isabella J. and Lili V. Houldsworth. She was preceded in death by her daughter, Virginia K. Ruth, May 27, 1980. A memorial service for Janet will be held at 11:00 am, Friday, May 26, 2006, at FIRST UNITED METHODIT CHURCH, corner of Drew and Franklin Streets, with Reverend Jane Voigts officiating. Burial will be in Appleton Highland Memorial Park. Friends may call at the church from 9:00 am, Friday, until the time of the service. A memorial fund is being established.

The goals I strive for are too high;
I‚Äôll ne‚Äôer attain them ere I die.
The world will say, ‚Äú She failed and died.‚Äù
But God will know I tried.

‚ÄòTis rare indeed, when heights we seek,
for everyone to reach the peak;
The gap ‚Äòtween trial and crown is spanned
By God‚Äôs forgiving loving hand.
Janet F. Ruth