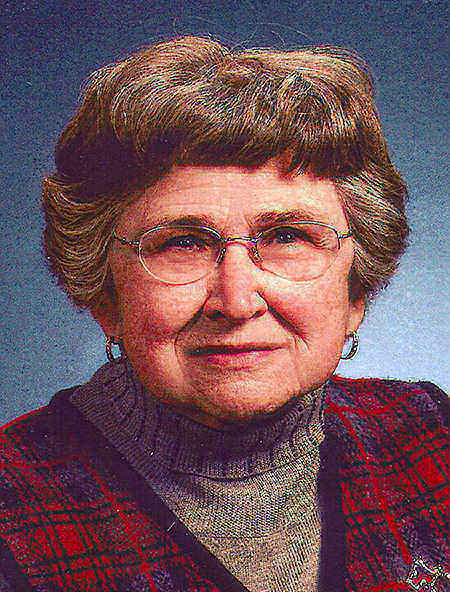 Jane Bishop Hoffman, age 89 of Appleton, passed away peacefully on Saturday, January 2, 2010 at her residence. She was born on September 12, 1920, in Neenah, WI; daughter of the late Harry and Bessie (Elizabeth Gear) Bishop.
Upon graduating from Neenah High School in 1938, where Jane was a member of the band and editor of the school paper, she became a student at the University of Wisconsin extension center in Menasha, WI during its' charter year. She later attended the Bellin School of Nursing in Green Bay, WI before marrying her husband Grant H. Hoffman on July 3, 1941.
Jane was a member of the United Church of Christ in Appleton, WI as well as a member of the Eastern Star in her youth. She loved nature, and was an accomplished artist of birds and landscapes. Jane was also a fine cook, particularly noted for baking and candy-making, and enjoyed vacationing with her husband to their properties in Northern WI and Texas. She was also proud to have worked for Bergstrom Paper, and Gimbals Department Store until her retirement in 1981.
Jane is preceded in death by her beloved husband Grant, sister Marjorie Hatch, aunt Maude Bryant, grandson Corey Miles Hoffman, and great-grandson Wyatt John Thern. She is survived by three sons: Grant L. (Carol); Richard C. (Marcia); Robert B.; two daughters: Patricia A. Chopra (Vijay); Kathleen J. Desjarlais (Clifford Dutton); twelve grandchildren: Leigh Ann, David, Eric, Adam, Sanjay, Aaron, Christina, Nicole, Richard, Phillip, Amber and Robert, as well as 15 great-grandchildren.
A memorial service for Jane will be held at 11:30 A.M. on Saturday, January 9 at Wichmann Funeral Home, 537 N. Superior St., Appleton, with visitation from 10:30 until the time of service. A memorial fund is being established in her name with the Children's Hospital of Neenah, Wisconsin.
Wichmann Funeral Home
537 N. Superior St.
Appleton, WI 54911
920 739-1231