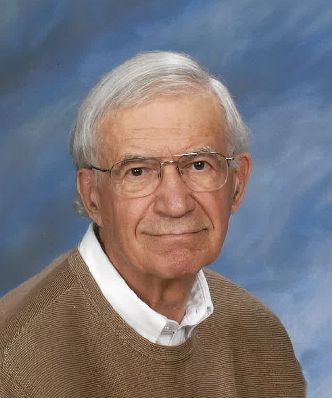 James (Jim) Lehman, 89, passed away peacefully on September 8, 2017 from natural causes at Oakridge Gardens, Appleton, WI. Jim was born January 2, 1928 to the late Esther (Raidy) and George Lehman in Kaukauna, WI. He graduated from Kaukauna High School in 1946. He was an excellent high school athlete and was elected to the Kaukauna High School sports Hall of Fame in 1975.

He married his high school sweetheart, Sue Rennicke on February 3, 1951. They were blessed with 64 years of marriage until Sue’s passing on June 2, 2015, He served in the Army for two years and was stationed in Berlin, Germany in 1951. Upon his return from the service, he joined the George A. Hormel Company as a sales representative. During his career, they lived in St. Louis MO, Bismark ND, Mitchell SD and then returned to Kaukauna in 1971.

Jim loved his wife and family above all things. Every day, Jim and Sue ended it with a kiss and an “I love you.” His children and their spouses felt his love as did his seven grandchildren and four great grandchildren. While not a man of many words, his actions spoke loudly. He was caring, loving and always there to help.

He was preceded in death by parents Esther and George Lehman, brother Pat Lehman and in-laws Leona and Edward Rennicke.

A Celebration of Life will take place on September 13, 2017 at 12 Noon with visitation from 10:00 AM until the time of service at Fargo Funeral Home, 400 Wisconsin Ave, Kaukauna, WI. In lieu of flowers, donations will be made to the Kaukauna Public Library and 1000 Islands Environmental Center, Kaukauna, WI. As a Christian, Jim now joins his wife Sue in the joys of heaven!

The family would like to thank Dr. Michael Werner at the Kaukauna Clinic who cared for dad over the years. We would also like to thank all of the staff at Touchmark and Oakridge Gardens where he spent the last two plus years of his life.