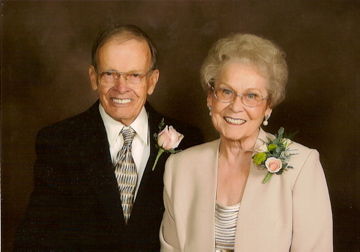 A quiet and gentle man of dignity and grace, a man who loved his profession, Dr. James S. Jeffrey, passed away peacefully on December 22, 2012, at Brewster Village in Appleton, Wisconsin after a beautiful giving life and a, eight-year journey with Alzheimer's Disease.

His demeanor was modest and never overbearing, and his moral consistency, concern and care for his patients and whoever he touched in life could never be denied. Dr. Jeff always wore a smile and took the time to listen. He believed listening was an integral part of healing.

Dr. Jeff was born in Huntley, Nebraska on June 6, 1926 to Robert A. and Hazel (Loesch) Jeffrey. The son of a Methodist minister, Jeffrey grew up during the Depression on the edge of the dust bowl. He attended high school in Gretna, Nebraska and upon graduation in 1944 joined the US Navy. Upon his discharge from the Navy in 1946 he entered the Nebraska College of Arts & Sciences at Lincoln and received his medical degree from the University of Nebraska in Omaha in 1954. He interned at St. Joseph's Hospital in Milwaukee until taking over retiring Dr. Flanagan's medical practice in Kaukauna in 1955, the year of the polio epidemic. In less than a year he was asked to join Drs. Geo. L. Boyd and George A. Behnke in practice at the Kaukauna Clinic, where he remained until his retirement in 1994.

Obstetrics was Dr. Jeff's favorite part of his practice. “I liked delivering babies the best”, he said, “I never lost that sense of wonder or mystique that goes with the birth of a child”.

He was a Founding Father and Member of the American Academy of Family Practice, served on various boards and committees at Kaukauna Community, St. Elizabeth, AMC hospitals and the Wheaton Franciscan Sisters. Along with serving on the Round House Manor Board in Kaukauna, he was a past Grand Knight of Kaukauna Council No.1033 Knights of Columbus, a member of the American Legion past president and a member of Kaukauna Lions.

Besides being involved with his local church community he was very active in the Green Bay Diocesan Cursillo Movement, Marriage Encounter Weekends and Marriage Preparation Courses. After retiring to Ouray, Colorado in 1994 he served as a caring minister in the Stephen Ministry, and volunteered in the Kairos Prison Ministry at the Delta Correctional Prison at Delta, Colorado. He was an Ouray County Performing Arts Board Member, and was instrumental in forming the Lions Club of Ouray and AARP in Ouray County.

Dr. Jeffrey was preceded in death by his parents, a son James, a daughter Amy Huber, brothers Robert (Peggy) Jeffrey of San Rafael, California and Marion Jeffrey of Omaha, Nebraska.

The funeral liturgy for Dr. Jeffrey will be held on Friday December 28, 2012, at St. Katharine Drexel Parish – St. Mary Church, 119 W. 7th Street, Kaukauna, with Fr. Jerry Pastors and Fr. Bob Lexa co-officiating. The family will greet friends and relatives at the Fargo Funeral Home, 400 W. Wisconsin Avenue in Kaukauna on Thursday, December 27, beginning at 4:00 pm until 7:00 pm and again at the church on Friday morning from 10:00 AM until the time of the service at 11:00 AM. Online condolences may be offered at www.wichmannfargo.com. In lieu of flowers, a memorial has been established for St. Paul Elder Service.

The family wishes to thank the many caregivers and friends who have cared, helped, prayed and loved us through these past years, and no words can convey how very much we appreciate the care and love given by the staff at Brewster Village to our dear Dr. Jeff.