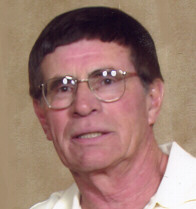 Age 63, was called home to Jesus on Monday September 11, 2006. Jim was born on March 3, 1943 in Appleton to John A. and Grace G. (Gerrits) Vander Heiden. He was formerly employed at Kramer-Ridge Auto Supply for 13 years, and recently employed at Presto Products for 31 years retiring on December 1, 2005. Jim is survived by his mother Grace Vander Heiden, Kimberly; his wife Shirley, a son Scott (Kristy) Vander Heiden, Darboy and their children Joshua and Abigail; a daughter Vicki (Peter) Zipperer, Kaukauna and their children Carsen and Claire and Vicki and Scott's mother Gwynne Sauer. He is also survived by a step-son Jordan (Kelly) Yingling, Appleton, two sisters Kay (Ed) Hudak, Neenah; Gail (Earl) Sprangers, Park Falls; one brother Gary (Gina) Vander Heiden, Grand Rapids, Michigan, and his godmother Florence Horn. Jim is further survived by his wife's family including her mother Marion Oudenhoven, Kimberly, a sister-in-law Mary Oudenhoven, Little Chute; a brother Duane (Betsy) Oudenhoven, Illinois; Bruce (Malynda) Oudenhoven, Little Chute; Keith (Pam) Oudenhoven, Darboy, numerous nieces, nephews, other relatives and friends.
He was preceded in death by his father John, his maternal and paternal grandparents, his father-in-law Jerome and his brother-in-law Leon, and other relatives

The Funeral Mass for Jim will be held at 10 AM Saturday, September 16, 2006 at St. Bernadette Catholic Church 2331 E. Lourdes Drive, Appleton with Fr. Don Zuleger officiating. Visitation will be held on Friday from 4-8 at the Wichmann Funeral Home Tri County Chapel with a prayer service at 7:30. There will also be visitation at the church on Saturday from 9 AM until the time of services. Burial will be in Holy Angels Cemetery in Darboy following the Funeral Mass. In lieu of flowers a memorial is being established.