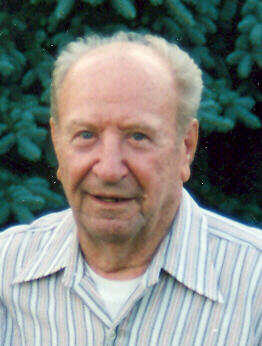 James L. Killen, age 95, passed away peacefully on September 4, 2010 at Villa St. Clare, Neenah. James was born on February 10, 1915, the son of the late George and Wilhelmina (Hermanns) Killen. He married Sylvia Lawrence on December 18, 1948 in Milwaukee; she preceded him in death in 2000. James served in World War II as a paratrooper for the Marines from 1940 until 1946. He was discharged with the rank of Captain, and received a Purple Heart for being wounded in Iwo Jima. Following his time in the military, James built what was known as Killen's Resort in Hayward, WI, which he owned and operated from 1948 until 1976. After the resort was built, he and Sylvia travelled during the winters, eventually buying a home in North Fort Myers, Florida, where they would live until returning to Menasha in 1985. James was active in his community, and loved fishing and being outdoors.
James is survived by two nieces, Jacqueline (Ira) Marcus, Carpentersville, IL, and Rose Moore, Springfield, IL; a nephew, Dominic (Margie) Greco, Springfield, IL; four step-granddaughters, Judi Vils, Scandanavia, WI, Linda Lee (Carol), Port Charlotte, FL, Kathie (Greg) Miller, Kaukauna, and Dianne (John) Etter, Gresham, OR; a step-grandson, Paul (Dawn) Bartell, Phoenix, AZ; and a step-son-in-law, Harold Forner.
He was further preceded in death by two brothers, Henry and Charles Killen; two sisters, Betty and Rose; and two step-daughters, Dorothy Bartell and Betty Forner.
Funeral services for James will be held at 2:00 p.m. on Thursday, September 9, 2010 at the WICHMANN TRI-COUNTY CHAPEL, 3212 South Oneida Street, Appleton, with Deacon Don Gigure officiating. Visitation will be on Thursday from 1:00 p.m. until the time of the service. Private burial will be at Highland Memorial Park. Memorial contributions in James' name may be made to Villa St. Clare, 130 Byrd Avenue, Neenah. The family would like to extend a sincere thank you to the staff at Villa St. Clare for their compassion, care, and support.