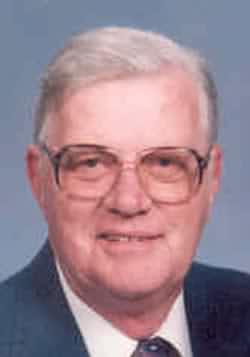 Age 76, passed away suddenly at his home on Saturday, May 10, 2003. Jim was born on January 9, 1927 in Appleton, Wisconsin, son of the late John and Rousch Oliver originally of Aberdeen, Scotland. On April 23, 1949, he married Mary Jane Lang, ‚ÄúMidge,‚Äù at St. Joseph Catholic Church in Appleton. A retired Quality Control Supervisor with American Can Co., Jim enjoyed spending time at his cottage in the Northwoods. He was also proud of his Scottish heritage, and entertained friends and family with Scottish songs learned as a child. Jim was a loving, caring husband, father and friend. He will be deeply missed by all.

Jim is preceded in death by his parents, his brother Alfred and his infant daughter, Mary.

The funeral liturgy will be at 11:00 a.m. on Tuesday, May 13, 2003, at SACRED HEART CATHOLIC CHURCH, 222 East Fremont Street, Appleton, with Fr. Robert Karuhn officiating. Friends will be received at the church from 9:30 a.m. until the time of the service. Entombment will be at Appleton Highland Memorial Park.

A memorial fund in Jim‚Äôs name has been established.