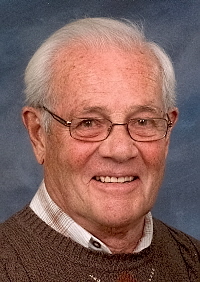 James Edward McMorrow, of Kaukauna, born April 14th, 1930 passed away at the age of 80 into the loving arms of his Savior surrounded by his family at AMC on Thursday, May 27, 2010. He fought a brave battle against lung cancer and left behind a loving wife of 55 years, Thelma (Enger) McMorrow, 6 children and their spouses, 15 grandchildren and one great grand child.

Jim served in the USMC during the Korean War, earning two purple hearts. He was actively part of VFW 3319, previously serving as commander. Jim graduated from Kaukauna High School in 1949. He was proud to be a Steamfitter, retiring from the Plumbers and Steamfitters Local 458 in 1992. He was an active member at Holy Cross Church in Kaukauna.

Jim loved the outdoors, deer hunting with his sons, turkey hunting with his brother and fishing. Fishing was his true passion where his patience developed a mastery he willingly shared on the water and at the table. He enjoyed walking to watch eagles and wildlife along the river. He loved going up North with his family for annual vacations, telling fish stories and singing songs with grandkids. He always attended activites of his grandkids.

The funeral liturgy will be at 12:00 p.m. on Tuesday, June 1, 2010, at HOLY CROSS CATHOLIC CHURCH, 309 Desnoyer St., Kaukauna, with Fr. Tom Pomeroy officiating. Friends will be received at the church from 10:00 a.m. until the time of the mass. A military honors service will follow the mass. Burial will be in Holy Cross Cemetery, Kaukauna.

For God so loved the world that he gave his only Son, so that everyone who believes in him might not perish but might have eternal life. John 3:16

“Brown Eyes, I'll meet you at St. Peter's gate!!!” “Love you always”
Dad, you will forever be in our hearts and thoughts. We are eternally gr ateful for your devotion to your family and friends and are truly blessed to have been part of your life.
One more limit, keep a cold one ready for us! Love, your family and friends.

In lieu of flowers, a memorial fund in Jim's name is being established.