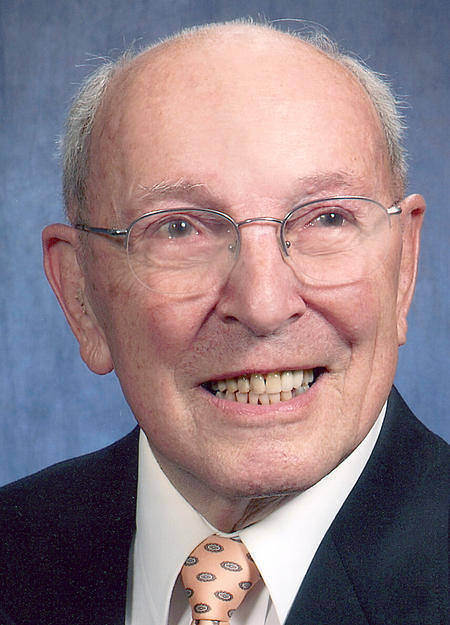 James E. Farley passed away on Saturday afternoon, May 15, 2010 at Peabody Manor, after a short battle with cancer. He was born in Kingsford, Michigan, the son of the late William and Grace (Ritter) Farley. They moved to Appleton when Jim was ten years old. He served two years in the U.S. Navy, spending most of his time in the South Pacific. Jim was a member of the American Legion. He married the late Helen Gambsky Farley on September 17, 1949. They enjoyed 56 loving years together in the Town of Menasha, until her passing on January 15, 2006.

After Jim's term in service, he was employed by Banta Corporation until his position as typesetter was dissolved. He then went into partnership with friends and formed 5 Star Corp., printing, etc. until the company dissolved. Jim then drove for Eagle and for Purlolator until his retirement in 1988. After his retirement he drove cars for Schmaltz Auto. Jim liked to golf and bowl with his friends and his nephew Pat. Many will remember Jim for his jokes and one liners.

Jim is survived by his nieces and nephews: Diane (Welhouse) Taylor, Neenah; Joanne (Stadler) Willems (Ted/Joe), Green Bay; Kathryn (Farley) Le Claire (Mark), Michigan; a very special nephew: Patrick (Kristine) Farley, Hubertus; Norbert (Nancy) Farley, Michigan; Jerry (Chrstine) Farley, Minnesota; Janice Welhouse, Oconto Falls and Lois (Welhouse) Grigg of Missouri. To all of us he was that very special Uncle and Helen, that very special Aunt, that held an extra special place in our hearts. Because they gave us so many treasured memories, they always will hold that place. He is further survived by his brother-in-law: George Gambsky, North Carolina, some of Helen's cousins and a very special friend, Esther Zeimer, Appleton.

Jim was preceded in death by his parents, his father and mother-in-law: George and Ella (Dettman) Gambsky; brothers: Norman and Clarence Farley; sister: Bernice-Stadler-Welhouse, a niece and three nephews.

The memorial service for Jim will be held at 11:30 am on Wednesday, May 19, 2010 at SACRED HEART CATHOLIC CHURCH, 222 E. Fremont Street, Appleton. Father Norm Krutzik will be officiating. Inurnment will take place at Highland Memorial Park. The time of visitation will take place from 10:00 am until the time of mass. In lieu of flowers, a memorial fund has been established in his name.