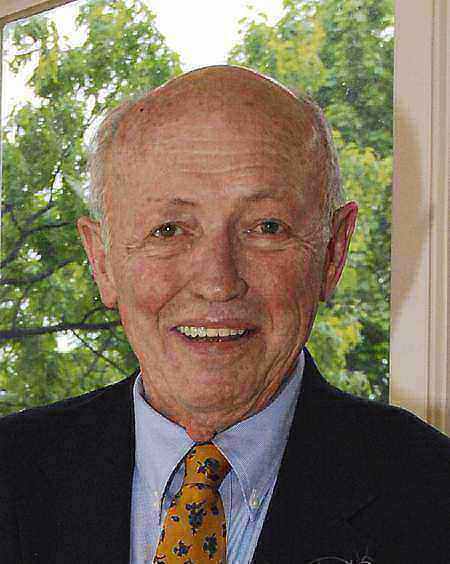 Professor James Dwight Dana, or "Jim", died in Appleton Thursday August 9th with friends and family at his side. He was 75 years old. He is survived by his wife, Elizabeth, or ‚ÄúBetsy‚Äù, his three sons, James, Robert, and George, his four grandchildren, William, James, Thomas, and Henry, and his brother, Edward. He was born on June 4, 1932 in Hartford, Connecticut, the son of William Bristol Dana and M. Eugenia Hotchkiss Dana. He grew up in West Hartford, Connecticut and graduated from Phillips Academy Andover in 1950. He received a bachelor's degree from Yale University (class of 1954) and a PhD in Economics from the Massachusetts Institute of Technology. He took a two-year leave from Yale to serve in the US Army during the Korean Conflict.
Jim and Betsy were married on February 13, 1960 in Massachusetts and moved to Appleton soon afterward. Jim spent his entire career at Lawrence University, where he was the John R. Kimberly Distinguished Professor of Economics. He taught at Lawrence University‚Äôs London Center in England in 1972 and 1983. He served as Interim Dean of the Faculty and for 21 years as the Chair of the Economics Department. He also taught courses at the University of Wisconsin ‚Äì Madison and often served as an expert witness in trials involving the determination of economic loss. At Lawrence, Jim was known for his passion for teaching. He had a reputation as an outstanding educator and in 1978 received Lawrence‚Äôs ‚ÄúExcellence in Teaching Award.‚Äù He taught Microeconomics, Corporate Finance, and International Economics and was known for always making time for his students. Although he officially retired in 2001, Jim continued to teach until earlier this year.
In the community, he served as Outagamie County Democratic Party Chairman in the 1960s. He also served on Appleton‚Äôs Parking & Transit Commission from 1980 to 1982 and again in the late 1980s.In his personal life, Jim was a loving and helping husband, a devoted father, and a stalwart friend. His boys came first and he loved to spend time with them. Among the many interests he shared with his children were traveling in Europe, teaching them to sail and to use computers, and especially coaching youth soccer. He also liked to play golf, to care for the family dog, and to support the Lawrence Vikings and the Green Bay Packers. He loved sailing, croquet, and swimming. For many years he owned a sailboat named the Danamite that he sailed in Door County and on Lake Winnebago. Later he and Betsy continued to enjoy sailing and swimming with friends in the Caribbean and Maine. In retirement his interests turned to gardening, especially at his summer home in Mill Hollow, Alstead, New Hampshire. At this second home, Jim was the acknowledged master of the croquet crease and everyone wanted to be his partner. He also loved to swim in Lake Warren, a pastime he enjoyed from childhood to the very end of his life. The house remains a favorite place for friends and relatives to gather. Jim was a strong supporter of Appleton‚Äôs A Better Chance program, Lawrence University, and his alma mater. Friends are encouraged to support these organizations in his name.
Jim will be interred at the Grove Street Cemetery in New Haven, Connecticut on August 17th.
Memorial services for Jim will be at 11 a.m. Saturday, September 22, 2007, at LAWRENCE UNIVERSITY MEMORIAL CHAPEL, 510 East College Avenue. The family will greet friends from 10:30 a.m. until the time of services at the chapel.