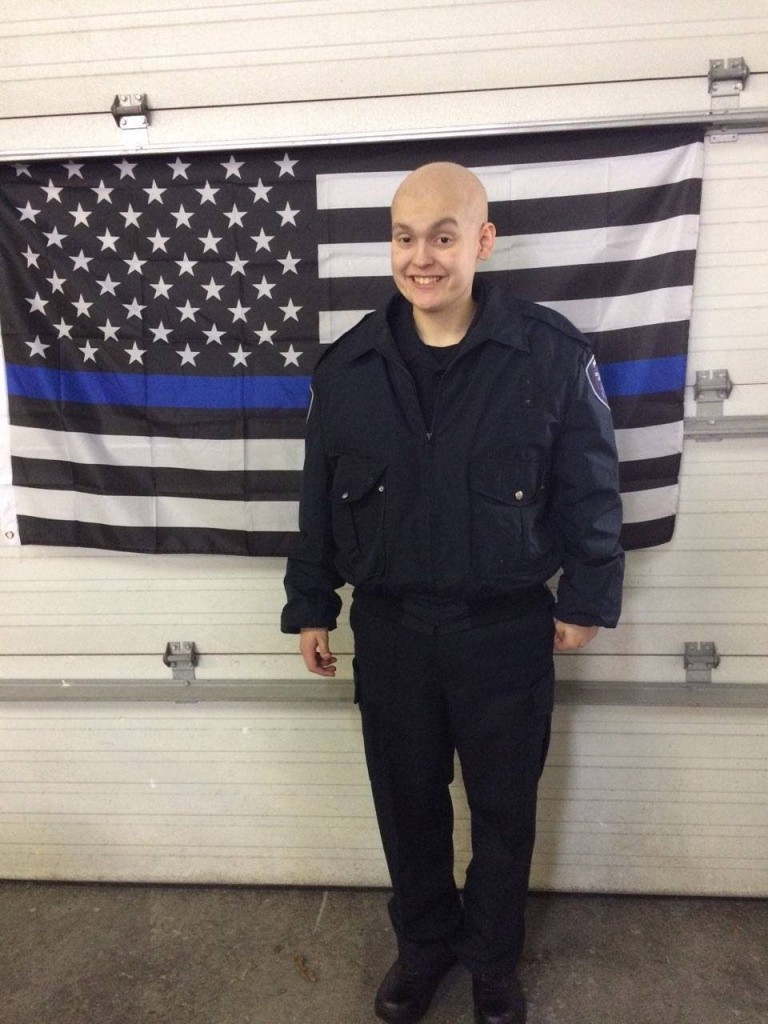 Jacob Howard Frerking, Appleton Police Officer #9275 and Outagamie County Deputy Sheriff, made his last call on January 18th, 2018. He came to the force through a Wish granted by Make-A-Wish, his dream to become a police officer. On September 9th, 2016 Chief Todd Thomas with APD swore him into service, adding more than 112 brothers and sisters to his Outagamie County family. His nearly year and a half of service gave him so many amazing experiences:
‚Ä¢Earned badge# 9275 and received the flag raised at the PD that morning

‚Ä¢Met Coach Jason Garrett from the Dallas Cowboys on security detail and received a football signed by the entire team (which he put on loan with his Uncle in Tomball, Texas)

‚Ä¢Received tactical arms training, and road in a tactical vehicle

The significance of his badge number containing #75 resulted from Jacob's love of racing, especially NASCAR, and he always used #75 as his personal car number. APD took this to heart when they assigned him his badge number.
Prior to Jacob's service in the city of Appleton, Jacob and his identical twin brother Jonathan came to this world on 25 August 1999 in Houston, Texas. Both boys were 8-½ weeks premature, so they had numerous battles for the first two years of their lives. Just prior to age three, they both got diagnosed with Autism, PDD - NOS and immediately started school in the Klein School District.
In January of 2014, our family moved to Appleton. Jacob attended Appleton West High School where he walked the stage on June 1st, 2016, an achievement that his oncologists did not think was possible.

Jacob finished his nearly two year battle with cancer, his smile and positive attitude infected everyone he encountered. He always loved:

‚Ä¢All his brothers and sisters in Law Enforcement

‚Ä¢His Alligator and his pet fish

Funeral services for Jacob will be held on Monday, January 22, 2018 at 11:00 AM at FIRST ENGLISH LUTHERAN CHURCH, 326 East North Street, Appleton, with Rev. Mary Bauer officiating. Friends may call on Monday from 9:00 AM until the time of the service at the church.

In lieu of flowers, a please make a donation in Jacob's name to the Ronald McDonald House of NE Wisconsin or to Make-A-Wish, if you must send flowers, please send a plant.

Jacob's parents and brother would like to extend a sincere thank you to the Children's Hospital in Milwaukee; the MACC unit at CHW; Nurse Adam Neal, his Hospice and Home Health team (especially Tracy, Julie, Nicole, Stuart, Jonathan, Sally, and Joan); Appleton Police Department; Outagamie Sheriff Department; Make-A-Wish (Especially Holly and Jack); Oshkosh Defense; and especially the Foss Family, for all their loving care and concern.
Online condolences may be offered at www.wichmannfargo.com