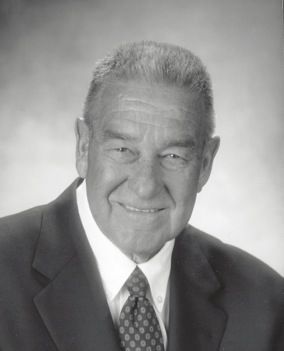 J.D. Ison passed away peacefully at home in Appleton, Wisconsin on September 3, 2014. Born in Ashland, Kentucky, son of the late John David Ison and Eliza Morman Ison, at an early age, J.D. exhibited the athleticism, sense of humor, wit, and intelligence that marked his life.

A high school football star, J.D. started his college football career at Georgia Tech, transferred after his freshman year to Baylor University, was a college All-American, played in the 1950 Senior Bowl, and played on the college All-Star team that beat the NFL Champion Philadelphia Eagles in 1950. In 1994, J.D. was inducted into the Baylor University Athletic Hall of Fame. He was drafted by the Chicago Cardinals and then drafted by Uncle Sam to play football in Germany and entertain the troops. It was in Germany that J.D. met the love of his life and wife of 58 years, the late Jane Foley Ison. J.D. and Jane were married November 23, 1953 at St. Lawrence Catholic Church in West Haven, Connecticut. J.D. started working in the grocery industry with the A&P in St. Louis, Missouri, and his career moved them frequently throughout the Midwest and East Coast. In 1974, they settled in Sheboygan, Wisconsin, when J.D. went to work for Schultz Sav-O Corporation, from which he retired as the Executive Vice President of Operations. J.D. and Jane moved to Appleton in 2011 to be closer to their daughter Liz.

J.D. was an athlete and he was competitive, whether the game was football, golf, tennis, ping-pong, pool, or cards. He loved to quote Vince Lombardi: “Show me a good loser and I'll show you a loser.” Appropriate for a big Green Bay Packers fan! His positive attitude was infectious, and he liked to say, “Send me in Coach, I'm ready!” J.D. was warm, funny, and the life of the party, and oh, how he loved a good joke! Whether entertaining his ROMEO (Retired Old Men Eating Out) buddies, or his grandchildren, with the latest and greatest, no one could forget his face turning red as he shook with silent fits of laughter as he got to the punch line. Even as his memory faded, he could still crack up the staff at Brewster Village with his humor. He was not above being silly – wearing wigs, making funny faces, cracking jokes and loving life!

Family and friends meant the world to J.D. and he had a way of making everyone feel special. Whether it was helping clean out your garage, or clearing a neighbor's snowy driveway, J. D. was always eager and willing to help in any way he could. He loved his wife, children, grandchildren, and great-granchildren. Even in recent times, when he could not always vocalize his feelings, the look in his eyes was enough to say, “I love you. I'm glad you're here.” The love he so generously gave was returned; everyone loved J.D. – his children, grandchildren, great-grandchildren, golfing buddies, the ROMEO group, and the caring staff at Brewster Village – everyone will always remember what was sexy and hummed…

Services will be held at 12 p.m. on Monday, September 8, 2014, at the Brewster Village Chapel, 3300 West Brewster Street, Appleton, with Fr. Jim Leary, OFM CAP., officiating. Friends may call at the chapel on Monday from 11 a.m. until the time of the service. Lunch will follow. Interment will be at St. Mary Cemetery in Appleton. Memorials have been established in J.D.'s name to benefit the Alzheimer's Association and Brewster Village. Online condolences can be offered at www.wichmannfargo.com.