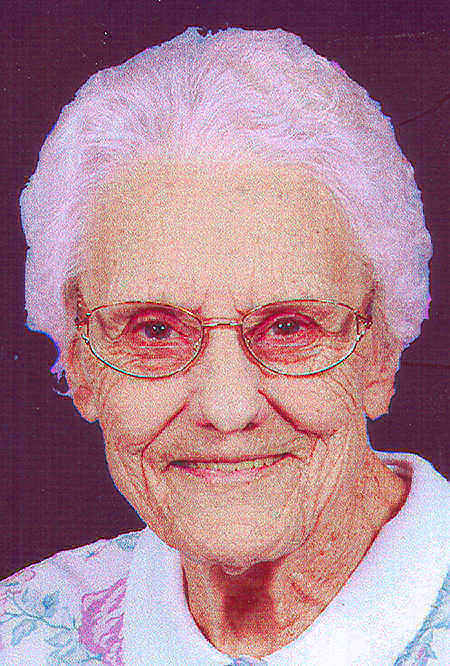 Irene E. Hansel, age 95, went to her eternal home on February 20, 2011 after a brief illness. She was born September 5, 1915, at home in Marathon City, Wisconsin, the daughter of the late Edward and Emilie Louise (Dahlke) Pyan. Irene was baptized and confirmed at St. Matthew's Lutheran Church in Marathon. She married her beloved husband, Russell E. Hansel on December 24, 1936 in Caledonia, Minnesota. He preceded her in death on December 15, 1972.

Irene's passion was making quilts, sewing different patterns for each grandchild. She enjoyed baking and when visiting, family members were always drawn to her cookie jar. While raising her family, she home canned most of the food from their large garden. She enjoyed watching all sports especially the Packers and liked to attend high school basketball games, plays and concerts. For many years she worked as noon playground supervisor at McKinley Grade School, but was happiest when she could spend time with her own grandchildren.

Besides her parents and husband, she is preceded in death by one grandchild, Jeffery Hansel, a daughter-in-law, Josie Hansel, four sisters: Edna Hess, Hattie Larson, Evelyn Kolasinki, Hilda Lodholz and five brothers: Harry, Marvin, Alvin, Edward R., and Milo Pyan, and all their spouses.

Funeral Services will be held at 11:00 a.m. on Wednesday, February 23rd, 2011, at Riverview Lutheran Church, 136 W. Seymour Street, Appleton, with the Rev. Adam Bode officiating. Visitation will be held at the church from 9:00 a.m. until the time of service. She will be laid to rest at Highland Memorial Park beside Russell, her beloved husband.

We wish to thank Affinity Visiting Nurses, Hospice Nurses and St. Elizabeth Hospital staff for the kind care they gave to our mother.