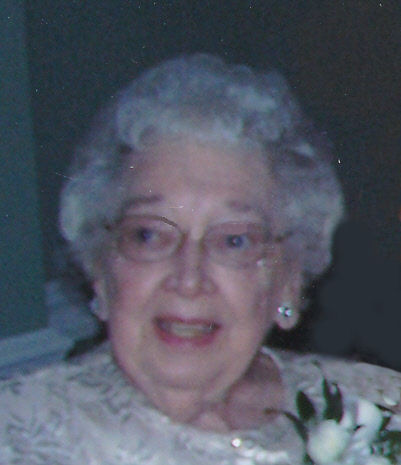 Irene M. De Bruin, age 88, of Kimberly, passed away on Saturday evening, November 5, 2011, at Colony Oaks in Appleton. Irene was born on September 19, 1923, in New London to the late Edward and Frances (Charnetske) Meshke. She went to grade school and high school in New London. Until recent years she got together with her eighth grade classmates for yearly reunions. During WWII, Irene worked for the FBI in Washington, D.C., returning to Wisconsin, marrying Bruce Krueger and living in Kimberly. Irene worked for the Cliff Wydeven Agency and AAL/Thrivent until her retirement. After Bruce's death she married Clarence De Bruin and they enjoyed 18 years together until his death in 1996. Irene lived in the Hallmark Apartments since 2001, making many friends. In her younger years Irene was an avid bowler; later she enjoyed going to the casino, watching Wheel Of Fortune and doing crossword puzzles. Irene loved Christmas, being famous for her candy and popcorn balls. Family Christmas get-togethers will never be the same. Survivors include her brothers, Joe Meshke and George Meshke; and her sister, Betty Edwards, all of Washington State; her step-daughters, Barbara (Mickey) Hungerford, Tucson, Arizona, and step-daughter Mary De Bruin, Appleton; her step-grandchildren, Jeff (Melanie) Hungerford, Mishawaka, Indiana; Heidi (Kirk) Crist, San Francisco, California; and Libby Hungerford, Mission, Kansas; her step great grand children, Bridget (Ryan) Towner and Kristen Hungerford, Indiana; and Audrey Crist, San Francisco, California; as well as nieces and nephews. She was preceded in death by her first husband, Bruce Krueger, her second husband Clarence De Bruin, and her sister Dolly. The Funeral Liturgy will be at NOON on Thursday, November 10, 2011 at HOLY SPIRIT PARISH, 600 E. Kimberly Avenue, Kimberly, with Fr. David Beaudry officiating. Friends may call directly at the church on Thursday from 10:30 a.m. until the time of services. Interment will be in Holy Name Cemetery, Kimberly.