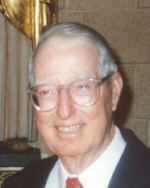 Age 86, passed away Tuesday, January 7, 2003 after a brief illness. Rene was born on June 28, 1916 in DePere, the son of Herman and Mary (DeCleene) Gossens. On February 4, 1947, Rene married the former Norma Hildebrand in Butternut, Wisconsin; she preceded him in death on November 7, 2002. Rene was a corporal in the U.S. Army with the 472nd Antiaircraft Automatic Weapons Battalion, Battery B, from 1943 to 1946. He served 28 months in the Philippines, Australia, and New Guinea. Rene was later employed by Kimberly-Clark Corporation in Kimberly for 42 years and was a faithful member of the Holy Name Catholic Church in Kimberly.

Rene's love of fishing and expertise at it were legendary. He also enjoyed bowling, playing cards, and was an avid Packer fan. He was a loving, kind,and gentle soul. Thank you, Dad, for creating a world for us where parents never fought, where love was never questioned, and generosity was a way of life. We love you and we miss you.

A shared funeral liturgy for Rene and his mother-in-law, Edna Hildebrand who passed away on Sunday, January 5 will be held at 12:00 Noon on Thursday, January 9, 2003 at HOLY NAME OF JESUS CATHOLIC CHURCH, 600 E. Kimberly Avenue in Kimberly with Fr. Dennis Bergsbaken officiating. Interment will be in the parish cemetery. Family and friends may visit at the church on Thursday from 9:30 AM until the hour of the services.

God saw you were getting tired
And a cure was not meant to be,
So he put his arms around you
And whispered ''Come to me.''
With tearful eyes we watched you,
As we saw you slip away.
Although we loved you deeply,
We could not make you stay.
Your Golden Heart stopped beating,
Hard working hand at rest.
God broke our hearts to prove to us,
He only takes the best.
-Therese Williamson