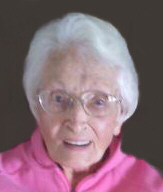 Idella J. Schwanke passed away peacefully into her loving God?s arms with her family at her side Wednesday morning September 1, 2010 after a long and loving life. She was born in Lena, Wisconsin on March 26, 1913, the youngest of ten children of Frank and Caroline (Lenneville) Courchane, and spent 92 years of her life in Kimberly raising her family. She did many things in her 97 years but the most important was the imprint of love, loyalty and friendship she placed on everyone who knew her. Her favorite phrase: “Life is good if you don't weaken.” She had a spunk, sass and sensibility about her that never diminished her sensitivity and strength.

The funeral liturgy for Idella will be held at 11:00 am on Saturday, September 4, 2010 at HOLY SPIRIT PARISH ? KIMBERLY, 600 E. Kimberly Avenue with Father David Beaudry officiating. Interment will take place at the parish cemetery. A time of visitation will take place at the church on Saturday from 9:00 am until the time of mass. In lieu of flowers, a memorial fund has been established in her name.

Our mom was a living example of God's grace on this earth.

The family would like to thank the doctors and staff at Bellin Hospital and Unity Hospice for their excellent care and compassion.