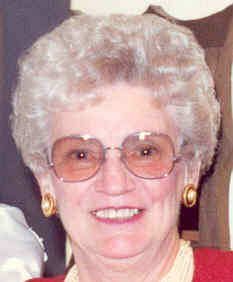 Age 78, died Saturday morning, September 27, 2003, at Cherry Meadows Hospice. She was born March 11, 1925, to the late J. Emil and Minnie (Peters) Helms, in Appleton. She married Lyle (Bud) Andraschko of Oshkosh on October 5, 1946 at Zion Lutheran Church, Appleton. He preceded her in death on June 13, 1991. Idabel was employed by the F. W. Woolworth Company , Oshkosh, from 1946-1965, where she was personnel supervisor and traveled around the state setting up new stores. She then went to Kitz & Pfeil Hardware Store from 1965- 1986 and 1992-1995. She was the hardware buyer and enjoyed going on buying trips to Chicago. Idabel loved going to new stores and setting them up and she enjoyed working for the Carl Staple family, owners of Kitz & Pfeil. They always made her feel like part of their family. In 1986 she and her husband retired and moved to Neilsville, where they had a lovely home in the woods, with their three horses, four dogs and her cat, Rocky. Idabel loved the company they had every week-end. She always cooked up a good meal for them. She like it when Lyle made maple syrup from all of their trees. When her husband died, Idabel, moved back to Oshkosh, but got lonesome for her brothers and their families. So in 1995 she moved to the Little Chute area, in 2000 she moved to Hallmark Place in Kimberly where she made many new friends. Idabel enjoyed many hobbies, but mostly crocheting afghans for people she loved. She was a good cribbage player and was hard to beat. Idabel was a member of Zion Lutheran Church, Appleton.Survivors include her brother, Rodney Helms, Appleton; a sister-in-law, Linda Husman, Oshkosh. Idabel had no children, but loved all of her nieces and nephews, Carl (Joanie) Helms, Tim (Kathy) Helms, David Helms, Linda (Gerry) Vandenberg, Patty (Dennis) Vande Burgt, Geri (Patrick) Wang, Gale (Greg) Mathes, Cookie (Tony) Passaro; her husband‚Äôs nephew, Chad (Renee) Husman and their children, Samantha and Jenna, they were very special as was Chad‚Äôs sister Tara. She was preceded in death by her brothers Vernon and Virgil Helms. Funeral services for Idabel will be held at 11:00 am, Tuesday, September 30, 2003, at ZION LUTHERAN CHURCH, 912 North Oneida Street, with Reverend Larry Matthews officiating. Burial will be in Lakeview Memorial Park Cemetery, Oshkosh. Friends may call at the church from 9:00 am, Tuesday, until the time of the service. A memorial fund is being established.