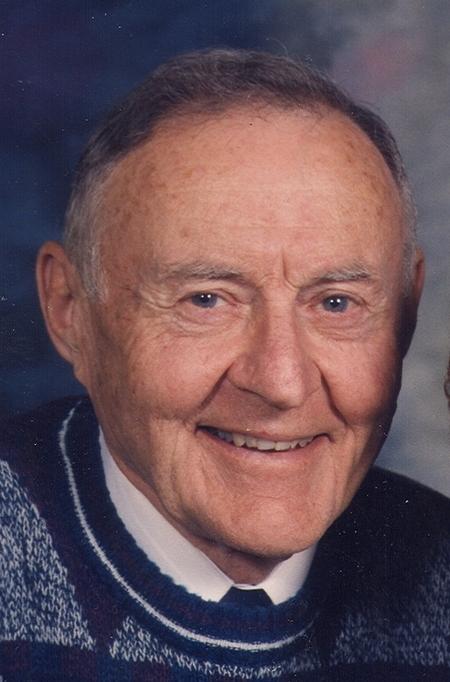 Howard Robert Pekarske began his new life in God's care on December 2, 2010, a life without Alzheimer's Disease or strokes. Howard was born on April 4, 1923, in Appleton, the fourth son of Robert and Lorine (Hauert) Pekarske. He attended school in Appleton and enjoyed playing hockey in Jones' Park. Howard played football at Appleton West High School, where he graduated in 1941. From 1943 until 1946, he proudly served his country in the United States Army in World War II. He was stationed in the U.S. and in the Philippines. Prior to and during the war, he met and corresponded with Wilma (Billie) Schroeder, who became the love of his life. On October 16, 1948, they were married and moved into the house that he had built for them. Howard served an apprenticeship with Wenzel Brothers Plumbing and became a Journeyman, then Master Plumber. He was a proud member of Local 400 Plumbers and Steamfitters for over 60 years. Howard loved carpentry, tree-trimming, growing apples, traveling, fishing, the Packers, and spending time with his family and friends at their cottage on Lake Winneconne, which was also built by him. Along the way, he and Wilma (Billie) had two daughters. Howard taught them so much, including tree-trimming, clearing drains, and fixing toilets! They raised their daughters to be self-sufficient and to believe that they could do anything they put their mind to. He retired in 1985 and spent his retirement relaxing and doing the things he loved.
Howard is survived by his wife of 62 years, Wilma (Billie); his two daughters, Mary (Greg) Pekarske-Siers, and Ann (Earl) Sager; the girl who put a twinkle in his eye, granddaughter Rachael Pekarske-Siers; his “grand-kitties,” Leo and Silver; sister, Rosemary Heideman; sisters-in-law, Lorna Pekarske, Jeanette Davis, Donna and Karen Schroeder, and Beverly (Lupe) Sanchez; brothers-in-law, Ken Schroeder, Llew (Carrie) Schroeder, and Jim (Doreen) Schroeder, and many nieces, nephews, Godchildren, and friends.
Those preceding him to Heaven were his parents; mother and father-in-law, Edward and Florence Schroeder; sister, Marguerite Feldman; brothers, Joseph and Donald Pekarske; sister-in-law, Nita Pekarske; brothers-in-law, Philip Bixby, Roland Heideman, Stanley Feldman, Richard Schroeder, Arleigh Schroeder, and Gayle Davis; niece Anita Sanchez; and nephew, Philip Bixby, III.
The funeral liturgy for Howard will be at 11:00 a.m. on Thursday, December 9, 2010 at ST. BERNARD CATHOLIC CHURCH, 1617 W. Pine Street, Appleton, with Fr. Dennis Ryan officiating. Friends may call from 5:00 p.m. until 8:00 p.m. on Wednesday, December 8, 2010 at WICHMANN FUNERAL HOME and at church on Thursday from 10:00 a.m. until the time of the mass. A prayer service will be held at 7:30 p.m. on Wednesday at the funeral home. Interment will take place at St. Joseph Cemetery, Appleton. Memorial donations in Howard's name may be made to a fund being established. The family would like to extend a sincere thank you to Dr. Johnson and the staff of the second and fourth floors at St. Elizabeth Hospital, and to Betty, Missy, and the entire staff at Manor Care for the wonderful care of Howard. The kindness and caring you have shown have been a great comfort to the family.