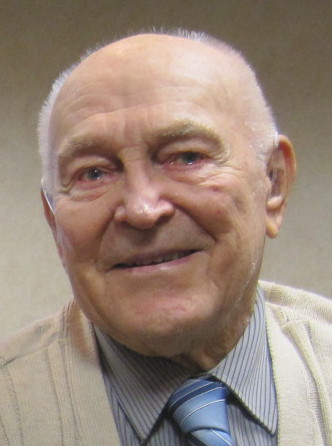 Howard L. Meyer, age 100, passed away Thanksgiving Day, November 22, 2012. He was born on January 17, 1912, in the Town of Harrison, Calumet County, the son of the late Albert and Anna (Wauda) Meyer. Howard married Carol Huebner on November 2, 1935 at the Evangelical Church in Oshkosh. He had lived in Kimberly, Combined Locks, and Appleton. Howard was a member of the Emmanuel United Methodist Church in Appleton.

Howard was a leader in Scouting and church work. He was a long time member of the YMCA, swimming 1, 000 miles. In 1976, he retired as a sales representative of the steel division of the I.Bahcall Co.

He was a devoted husband, father, and “Gramps”. Howard was a very loving and caring person who enjoyed golfing, bowling, and fishing with his family and helping others out whenever he could. He will be missed very much by everyone who knew him.

The funeral service for Howard will be held at 11:00 am on Tuesday, November 27, 2012 at the Wichmann Tri-County Chapel. Entombment will take place at Highland Memorial Park. A time of visitation will be held on Tuesday from 10:00 am until the time of service. In lieu of flowers, a memorial fund has been established for Emmanuel United Methodist Church in Appleton. Online condolences can be expressed at www.wichmannfargo.com.

Howard's family would like to thank the Renaissance Assisted Living and their staff, who provided tremendous care and enjoyment the last seven months of his life. A special thank you to Dr. David Beck and his staff at Appleton Medical Center, who provided compassionate care in the last hours of his life.