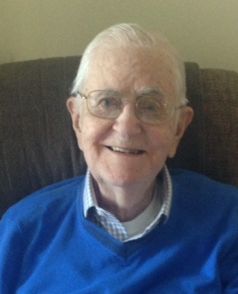 Howard Lemke, Appleton, age 90, passed away peacefully on Wednesday, December 6, 2017. He was born on July 21, 1927, in the Town of Morrison, the son of Gilbert and Minnie Lemke. He was a graduate of East DePere High School, and received a BS degree from the University of WI in Madison in 1952. After graduation, he spent two years of service in the Army and three years in the National Guard.

Howard was an active member of St. Paul Lutheran Church. He was involved in the Men’s Club, Sr. Fellowship Group, Bible Study Class, served as greeter, and was instrumental in organizing a shut-in visitor program. He was a charter member of the Senior/Net computer group of FVTC.

Howard was an avid lifelong Chicago Cubs fan. In his early years, he played shortstop for the Morrison baseball team. He was on various bowling, shuffleboard and horseshoe teams. His big love was perch and trout fishing, especially fishing on their boat with Milly in the summer. His hobby was refinishing antique furniture. Favorite cards were cribbage and sheepshead. His clever wit was appreciated by his many friends.

He is survived by his wife, Milly, three children and their spouses: Brian (Jackie) Lemke of Fishers, IN; Amy Lemke of Evanston, IL, and Laurie (Mark) West of Park City, UT., eight grandchildren: Kurt, Alyssa, Camryn, and Monette Lemke of Indiana; Alina McIntyre, of IL; 2nd Lt. Mason West and Claire and Augie West of Utah. He is further survived by sister-in-law, Gladys Gass of Manitowoc; brother-in-law Elton Waack of Lake Chetek, along with nieces, nephews, other relatives and friends. He was preceded in death by his parents, Gilbert and Minnie Lemke, and in-laws Edwin and Marie Waack.

Funeral services for Howard will be held at 11 am on Saturday, December 9, 2017 at ST. PAUL LUTHERAN CHURCH, 302 N. Morrison St., Appleton with Pastor Peter Walther officiating. Friends may call at church from 9:30 am until the time of service. Burial will take place at Riverside Cemetery. In lieu of flowers, memorials may be given to St. Paul Lutheran Church or St. Paul ECC (Child Care) of Appleton.