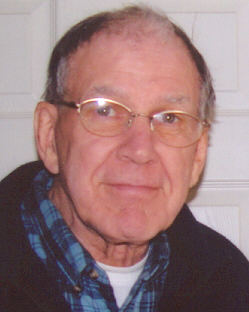 HOWARD J. ‚ÄúSAM‚Äù YEAGER
Of Kimberly, age 81 years, died Sunday, August 21, 2005 at Century Oaks in Darboy. He was born October 10, 1923 in Wisconsin Rapids, the son of the late Anthony and Stella (Nobles) Yeager. Sam graduated from Lincoln High School in Wisconsin Rapids and the University of Wisconsin ‚Äì Madison with a BS in Accounting in 1948. Howard married Marilyn Daly on June 19, 1948 at SS Peter & Paul Catholic Church, Wisconsin Rapids. He was an accountant at Nekoosa Edwards from 1955-1969 and later at Voith, formerly Appleton Mills, from 1969-1989. Over the years he was active in many professional accounting organizations. Sam was a member of Holy Cross Catholic Church, Kaukauna and the Mid-Valley Golf Course, DePere. He enjoyed hunting, fishing and golfing with family and friends.
Howard is survived by his wife, Marilyn Yeager of Kimberly; 2 daughters, Mary (James) Aylward of Scottsdale, AZ and Susan (Anastacio) Gonzalez of Point Reyes, CA; a son, Thomas (Stacie) Yeager of Kennewick, WA; 9 grandchildren, Brendt (Angelique) Malcheski, Matt (Rebecca) and Luke (Nicole) Giacomini, Tara (Matt) Veal, Paulita and Anastacia Gonzalez, Dan, Scott and Michelle Yeager; great grandson, Clayton Veal; 4 brothers, George (Loretta) Yeager of Nekoosa, WI, Leon Yeager of Wisconsin Rapids, Tony (Pat) Yeager of Montana and Kenneth (Shirley) Yeager of Minneapolis, MN; 2 sisters, Helen Reimer and Genevieve (Dale) Knuth both of Wisconsin Rapids. He is further survived by nieces, nephews, other relatives and friends. Sam was preceded in death by his parents and his brother Glen Yeager.
The funeral liturgy will be held at 12:00 Noon on Thursday, August 25, 2005 at HOLY CROSS CATHOLIC CHURCH, 309 Desnoyer St., Kaukauna with Fr. Marty Fox officiating. The family will receive friends from 10:00 am ‚Äì noon at the Church. In lieu of flowers, memorials to the Alzheimer‚Äôs Research and Heartland Hospice are appreciated. Special thanks to Heartland Hospice and the staff at Century Oaks.