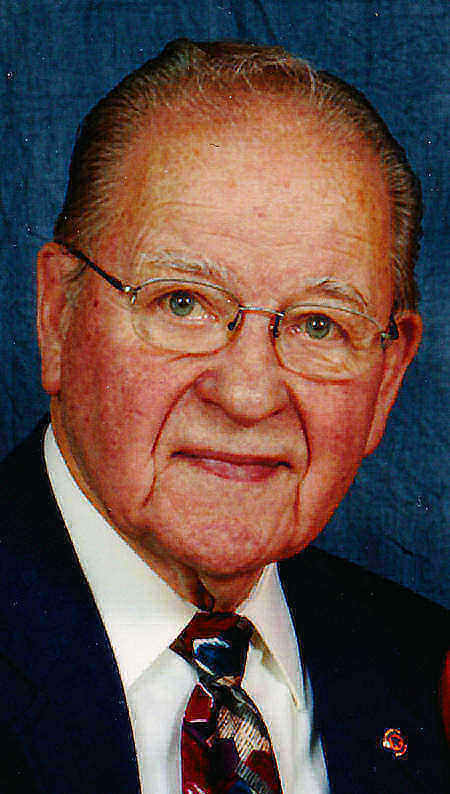 Howard Horn, age 88, of Appleton, passed away peacefully on Friday, October 26, 2012 at his home. He was born on September 5, 1924, in Appleton, the son of the late Wallie and Alma (Brueggeman) Horn. Hub graduated from Appleton West High School in 1942. He served as a field artillery machine gunner and ammunition carrier with the 44th Infantry Division in WWII, in the European Theatre in France, Germany, and Austria, from September 1944 to May 1945. On June 16, 1951, Howard married Donna Kasten at Zion Lutheran Church in Appleton. He worked for 23 years as a wire weaver at Appleton Wire Works, and three years with Wm. Tiede Builder, and finished with thirteen years at Menasha-Sonoco Cores, retiring in 1986.

Hub played many years as a pitcher of fast-pitch softball for championship teams with his field artillery team, St. Paul Ev. Lutheran Church, and Appleton Wire Works. He was a manager for “Little League” and “Babe-Ruth” baseball teams for six years. Also active in league bowling and enjoyed the card game of sheepshead. Hub was a Packer season ticket holder starting when Lambeau Field was built in 1957. He was a big fan of “Big Ten” football and basketball.

Hub was a member of the Harvey Pierre Post #2778 VFW. Howard and Donna enjoyed traveling the country to annual Army Reunions for 35 years.

Hub was preceded in death by his sister, Doris Schwark; father and mother-in-law: Louis and Edna Kasten, and their son, Richard.

The funeral service for Howard will be held at 11:00 am on Monday, October 29, 2012 at St. Paul Ev. Lutheran Church, 302 N. Morrison Street, Appleton. Rev. Paul Jenkins will be officiating. Interment will take place at Highland Memorial Park in Appleton. A visitation will be held on Monday at the church from 9:00 am until the time of service. Memorials to St. Paul Ev. Lutheran Church are appreciated. Online condolences can be expressed at www.wichmannfargo.com.