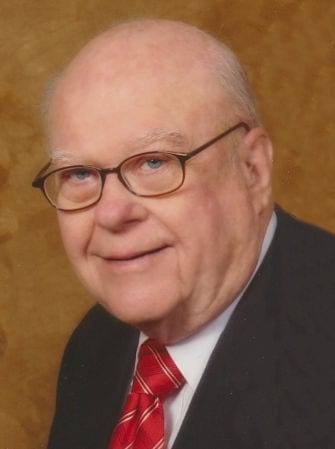 Howard E. Pleuss, beloved husband, father, grandfather, and great-grandfather, age 98, answered the calling of Our Lord Jesus Christ, on February 22, 2020.  Howard was born on January 25, 1922, in Manitowoc, son of the late Carl and Lillian (Rahmlow) Pleuss.   Some of Howard’s early years were spent on the family dairy farm in Manitowoc County before attending and graduating from Manitowoc Lincoln High School.  Howard was a proud graduate of the United States Military Academy at West Point.

Following his 1946 graduation from West Point, Howard married his high school sweetheart, Carole Schmidt, on June 15 of that same year.  For the first eight years of their marriage, Howard was an officer in the U.S. Army.  They lived a happy army life in El Paso, Texas, Yokohama, Japan, and Lawton, Oklahoma.  Howard left the Army to work for Aid Association for Lutherans (AAL).  He and Carole lived in Manitowoc, Wisconsin, Eau Claire, Wisconsin, and Edina, Minnesota.  In 1970 Howard was transferred to work in the AAL home office in Appleton, Wisconsin as a Regional Director of Agencies.  In Appleton, Howard and Carole were active members of Faith Lutheran Church, which was a very important part of their life.

Howard enjoyed outdoor activities including fishing, golf, boating, and water skiing (to age 70!).  He was active in the Lions Club in Appleton; and he enjoyed playing bridge, sheepshead, and casino gambling.

Howard retired from AAL in 1983.  He then began a new career with Degree of Honor Protective Association (a life insurance company) as the National Sales Manager.  He retired from Degree of Honor in 1990.  In 2018 he and Carole moved to assisted living in Appleton.  At the time of his passing, Howard was living at Eagle Point Senior Living in Appleton.

Howard was preceded in death by his parents, a sister Marian (William) Thomas, a son-in-law Scott Hanks, and his wife Carole (in October of 2019).

Funeral services for Howard will be held at 10:30 a.m. on Saturday, February 29, 2020, at Faith Lutheran Church, located at 601 E. Glendale Avenue in Appleton.  Rev. Daniel Thews will officiate, and a private interment will take place in Evergreen Cemetery, Manitowoc.  Family and friends are invited to gather at the church on Saturday morning from 9:00 a.m. until the time of the service.

Memorials to Faith Lutheran Church, Appleton Noon Lions Club, or a charity of your choice in Howard’s name are appreciated.