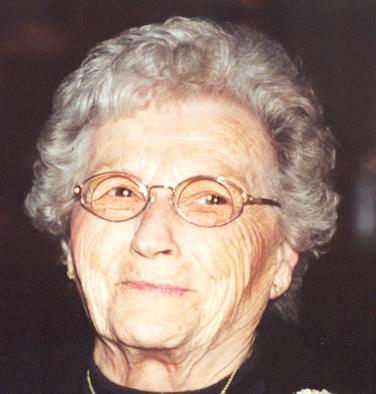 Hilda C. Wiedenhaupt, of Kaukauna, age 85 years, died on Monday, January 1, 2007. She was born May 5, 1921 in Kaukauna, the daughter of the late Albert and Anna (Sasnowski) Balck. Hilda married Harold ‚ÄúChuck‚Äù Wiedenhaupt on September 26, 1953 at Trinity Ev. Lutheran Church, Kaukauna. The couple lived and farmed in the Town of Buchanan. She enjoyed her faith, family and friends. Hilda loved spending time with her grandsons.

The funeral service for Hilda will be held at 10:30 am on Monday, January 8, 2007 at TRINITY EV. LUTHERAN CHURCH, 804 Grignon Street, Kaukauna with Rev. Mark Luetzow officiating. Burial will take place at Trinity Ev. Lutheran Cemetery. Friends may call at Fargo Funeral Home on Sunday, January 7th from 4:00 ‚Äì 7:00 pm and on Monday at the Church from 10:00 am until the time of service. In lieu of flowers, a memorial fund has been established in her name.

The family of Hilda would like to thank the caregivers at St. Paul Home for their compassion and excellent care.