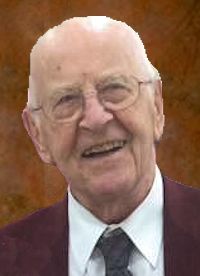 Herman Thomas Krebsbach, age 91, passed away peacefully surrounded by his family on June 3, 2019, at Willow Lane in Appleton. Herman was born on April 2, 1928, son of the late Peter and Pauline (Birschbach). He was the youngest and last survivor of 12 siblings who grew up on a farm in St. Cloud, Wisconsin. He was a trained machinist working for several shops throughout the Fox Valley. Herman met his love, Carol Springer, during a St. Patrick’s Day dance. They wed on July 4, 1952 and shared 64 years of marriage before her passing in 2016.

Herman was a gentle soul who always had a warm smile and an ear to listen. He enjoyed casino bus trips with his wife, fishing, and volunteering at St. Joseph’s food pantry. Herman let the Lord lead him and lead by example; being active in the Grandpa Patrol (crossing guards) for Holy Angels School, lectoring for weekday Masses, as well as being a cleaner and handyman for the church. He will always be remembered for his witty sense of humor and amazing love for his family.

Herman’s family would like to thank the amazing staff at Willow Lane for not only caring for their Dad, but for loving him like family.

The Funeral Liturgy for Herman will be held at 12:00 noon on Saturday, June 15, 2019, at HOLY SPIRIT-DARBOY CAMPUS, W2806 County Rd KK, with Father Bob Kollath officiating. A time of visitation will be held from 10:00 am until the time of Mass. In lieu of flowers, a memorial in Herman’s name will be established. Those not attending the service may mail condolences to Wichmann Funeral Home or express them at www.wichmannfargo.com.