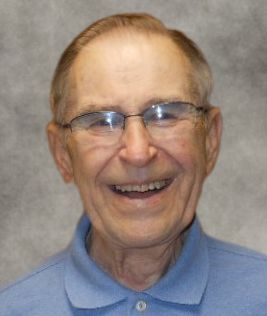 Herman Joseph Ciha, Kimberly/Verona, age 89, passed away from natural causes on March 5, 2018, at Willow Pointe Memory Care in Verona, Wisconsin. He was born May 22, 1928, in Appleton, Wisconsin, son of the late Joseph and Octavia (Dandois) Ciha. He married Rita Van Stralen on October 14, 1954, and they shared 54 years together.

When Herman was born, his family lived for a time in Sherwood, Wisconsin, where his father Joseph had answered an ad to be a cheese maker. Joseph subsequently moved his family to the town of Center, north of Appleton, where he purchased his own cheese factory, living in a house attached to it. As he grew up, Herman worked very hard supporting his Dad in the business, washing cans, loading the milk truck, and turning cheese over in the vat, often seven days a week.

Herman attended grades 1-8 at a two-room school at St. Edward’s in Mackville, where attending mass every day before classes was expected. Each room had four grades of classes, both taught by strict nuns, who he said prepared him well for high school. Attending Appleton West High School, where he graduated in 1947, Herman liked math and US/World history the best. During his last two years in high school, he needed a work permit because his Dad needed help in the cheese factory, which was doing steady business at the time. Following graduation, he continued to work there, intending to stay in the business himself.

At age 22, Herman was drafted into the army in December 1950, during the Korean War. He trained at Fort Sheridan in Chicago, ending up in the 2nd Armored Division unit. Basic training was in Fort Hood, Texas before being shipped out of Houston on a one-stacker troop transport boat on a 14-day trip to Bremerhaven, Germany. With tensions high with the Soviet Union at that time, he served 18 months as a half-track driver and radio operator in the border regions of Germany, Austria and Czechoslovakia, coming home with the rank of corporal.

His thoughts upon returning to Center in December 1952 were to work the cheese factory. Along with his Dad, he built up the business to produce twice as much as before, but it was a lot of work with little return on investment. After meeting and marrying the love of his life, Rita, he still worked the cheese factory for about a year before realizing that it would not support his growing family. He worked in a paper mill for almost a year before joining the Appleton Post Office as a letter carrier, retiring from there in 1985.

Told by Rita after his retirement from the Post Office that “You’re too young to die; find something to do”, he then enrolled in an H&R Block tax preparation course and prepared taxes for them for seven and a half years. His constant interest in learning led him to take computer classes, and he eventually went into the tax preparation business for himself in 1993, setting up an office in the basement of his home. In addition to serving over 200 tax clients over 17 years, he also made time to teach SeniorNet computer classes to other seniors at Fox Valley Technical College. His interest in protecting the benefits of retired federal employees let to his involvement in the National Association of Retired Federal Employees (NARFE), where he contributed articles to their monthly newsletter and served as state NARFE President for four years. He and Rita loved to travel around the country to their conventions.

In his spare time, Herman loved to play golf with his sons and good friends. He always tuned into Chicago Cubs and Green Bay Packers games, attending numerous games at Wrigley and Lambeau Fields. He and Rita loved to travel, driving rustic roads and visiting dozens of states over the years. Never afraid to tackle do-it-yourself projects, he often repaired his own cars and remodeled many parts of his home. He took pride in his house and yard, especially the rose bush and flowers he planted along his driveway.

He was preceded in death by his wife, Rita, parents Joseph and Octavia Ciha; sisters Virginia Van Iten, Gladys Jochman, and Geraldine Withagen; a nephew, Richard Withagen, and a niece, Bonnie Withagen.

A memorial service for Herman will be held at 6:30 PM on Thursday, March 22, at the Jansen Fargo Funeral Home, 204 E. Kimberly Avenue in Kimberly. Family and friends are invited to gather at the funeral home on Thursday, from 5:30 until the time of the prayer service.

Herman’s family wishes to thank the caregivers at Willow Pointe Memory Care and Heartland Hospice. Memorials can be made to the Melanoma Research Foundation or the American Cancer Society.