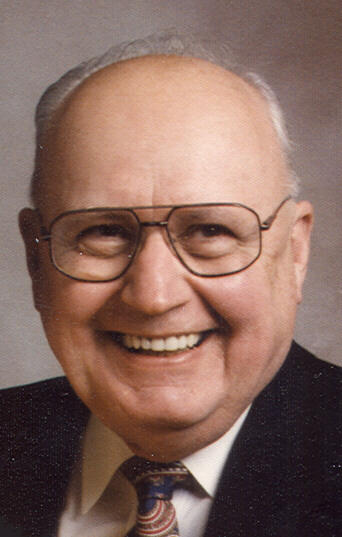 Herbert W. Krueger Sr., age 89, was met at Heaven's Gate on Tuesday, June 9, 2009, by the love of his life and wife of 66 years, Lily. Herb was born in North Lake, Wisconsin on April 23, 1920, to the late Henry and Ella (Traeder) Krueger. On June 12, 1920 Herb was born into God's family through Holy Baptism at St. John's Evangelical Church in Merton, Wisconsin. On June 3, 1934, Herb was confirmed at Zion Ev. Lutheran Church in Hartland, Wisconsin. He attended grade school at Tamarack, a single room school where one teacher taught all eight grades. He furthered his education at Milwaukee School of Engineering. Herb was a firm believer in education and continued studying through his 80th year.

On February 28, 1942, he married Lily A. Kuphall at St. John's Lutheran Church in Wauwatosa, Wisconsin. Their marriage was blessed with four children: James, Joan, Patricia, and Herbert Jr. Herb and Lily lived in the Milwaukee area until 1962 when the family moved to Appleton. Herb joined AAL on August 25, 1958, and he was appointed General Agent on January 1, 1963 in Appleton. Herb retired from AAL on May 31, 1987. Throughout his career as a General Agent his agency ranked number one nationally nineteen times and number two five times. During his thirty-two years, the insurance business provided many opportunities for him to serve the industry. His involvement included: President of Wisconsin Fraternal Life Underwriters of AAL, President of Wisconsin Association of Life Underwriters, President of Wisconsin General Agents and Managers Association, President of National Association of Fraternal Insurance Counselors, member of the National Association of Life Underwriters Board of Trustees, and chairman of Northeast Wisconsin Golden Key Society. Herb was honored for his industry involvement by being named a recipient of the Jack Nussbaum Award in 1975. In 2004, the Herb Krueger Family Office was dedicated at the American College in Bryn Mawr, Pennsylvania, to honor the to-date three generations of his family who serve in the insurance industry.

Herb and Lily joined Mount Olive Ev. Lutheran Church in 1969, where he served in various positions including: Executive Director, president of the congregation, member of the board of education, church council, and building committee, chairman of the congregation's Reaching Out Program, chairman of the constitution revision committee, chairman of the Northern Wisconsin District's Lift High the Cross Program, and was also a member of the Wisconsin Evangelical Lutheran Synod Board of Trustees from 1987 until 1993. Herb was also very active with many outreach and fund-raising programs at Fox Valley Lutheran High School over the years.

The Christian Funeral for Herb will be at 11:00 AM on Monday, June 15, 2009, at MOUNT OLIVE EV. LUTHERAN CHURCH, 930 East Florida Avenue, Appleton, with Rev. Robert Raasch officiating. Friends may call directly at Mount Olive Ev. Lutheran Church on Sunday, June 14 from 1:00 PM until 4:00 PM and again on Monday from 9:30 AM until the time of services. Entombment will be in Highland Memorial Park. In lieu of flowers, memorials may be directed to Mount Olive Ev. Lutheran Church, Fox Valley Lutheran High School, or the Time of Grace Ministry.

The family would like to express their sincere appreciation to the staff at Appleton Medical Center for all of love, care and concern that they gave to Herb and his family.