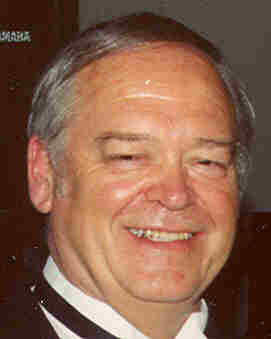 Herb Kesler, 76, of Appleton, died peacefully on Tuesday, February, 24, 2004, surrounded by his family at Cherry Meadows Hospice. His death was caused by complications from diabetes. Herb, son of the late Agnes (Smudde) and Harry Kesler, was born July 17, 1927, in Marshfield, WI, along with his identical twin brother Harold. Herb and Harold were inseparable in many ways throughout Herb's life. In WW II, Herb served in the Navy in the Philippines and the Marshall Islands.
For the Bikini Islands A-bomb tests his ship serviced the captured German and Japanese battleships. Herb attended Marquette University and St. Norbert College where he graduated with a degree in English and Business. In DePere he met Anne Quatsoe whom he married on Nov. 24, 1951. They spent nearly 48 years together before her death in October of 1999. Herb began his career working with his father in the Kirby vacuum cleaner distribution business. He was promoted to Distributor and eventually built a sales organization of 125 members in 23 area offices. He also owned and managed rental properties throughout Wisconsin. He was active in Neenah/Menasha Elks Club, United Commercial Travelers, where he served as a senior counselor, the Knights of Columbus, and as member/president of Serra Club. Herb was an active, charter member of St. Pius X Parish. He and Anne delighted in dancing, and they belonged to several dance clubs. He greatly enjoyed spending time with his family, especially boating, and at the family cottage. Ardent travelers, he and Anne traveled to more than twenty countries.
Survivors include three daughters, Sue (Terry) Pollack, Appleton; Katie Kesler, Milwaukee; Jane (Mike) Koenecke, Dallas, TX; six sons, John (Nancy) De Pere; Jim (Debby), Madison; Jeff (Jody), Appleton; Joe, New York, NY; Paul, Appleton; Pat (Julie), Waupaca; 13 grandchildren: Sarah, Laura, Mike, Nick, Craig, Dan, Becky Greg, Jenny, Megan, David, Christopher and Sam; his twin brother, Harold (Mary), AZ; six sisters, Eileen Phelan, CO; Vivian (Jim) Peterson, CA; Sr. Marilyn Kesler, SSND, Milwaukee; Carole Phillips, Green Bay; Harriet Kesler, MD, Karlene Kesler, CA; many other thoughtful and caring in-laws, relatives and friends.
He was preceded in death by his wife, Anne, his grandson Bradley Kesler and his brother Vernon who was killed during the Korean Conflict. A funeral mass will take place on Monday March 1, 2004, at 11:30 am, at St. PIUS X CATHOLIC CHURCH, 500 W. Marquette St., Appleton, with Father Donald Zuleger officiating. Entombment will be in St. Joseph Cemetery. Friends may call at the church after 9:30 am. Monday, March 1, 2004, until the time of the mass. In lieu of flowers, donations are welcomed to the American Diabetes Association, or to Cherry Meadows Hospice at Peabody Manor in Appleton. The family wishes to express its appreciation to the caring nurses at St. Elizabeth's, especially Drs. Homburg and Logan, and to the entire staff at Cherry Meadows Hospice for their compassion and treatment of Herb with the utmost dignity and respect.