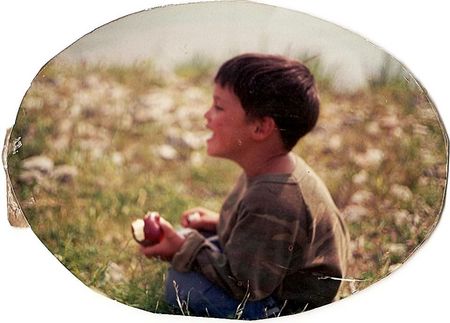 Henry Gingrass Spieth — 3 May 1987 to 26 September 2012. Born in Hoffman Estates, Illinois. Henry moved often when he was young to be with his dad who was in the Marine Corps and eventually settled himself in Chicago where he went to college. Henry passed away in his sleep at his parents' home in Appleton, Wisconsin early Wednesday morning, September 26, after a 2½-year battle with brain cancer. He was with the love of his life Marissa, his family and, of course, his best buddy, Pierre. He is now at peace and no longer has to fight or be in pain. Henry was an extraordinarily talented young man who was known to his friends as Sugar Ray Hank for his quick defense of friends, family and sense of wrong. Writer of verse, painter of pictures, and slayer of dragons, he has left a hole in our souls that only time will heal. We will never get over his leaving so soon but we all have him in our hearts and minds and we know we will see him again.
He leaves behind his dad, Phil, his mom, Tracy, his brothers, Ben, Matt and Nolan, his sister, Becky, and his nieces, McKenna and Piper. He has 6 aunts, 6 uncles, 13 cousins, Grandma Noreen nee Gingrass Spieth in Bark River, Michigan, and a Grandma and Grandpa Gross and Great-Grandma Gross in St. Louis, Missouri.