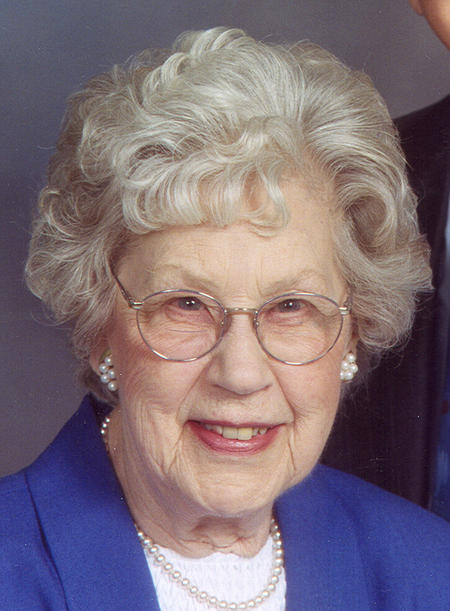 Henrietta Rosalie Pomeday (Radewitz), resident of the Grand Horizon Home in Appleton, entered into Eternal Life on Thursday, December 18, 2008 at age 92. She was born in Racine, WI on May 5, 1916 to the late John and Wanda Radewitz. She was united in marriage to Donald O. Pomeday on November 24, 1937 in Racine, WI. He preceded her in death on August 13, 2007.

Henrietta was a very elegant woman. An excellent homemaker, she spent much of her time sewing clothes for her children. Her greatest pleasures were cooking family dinners and spending time with her children and their families. She was a bookkeeper, but she had an artistic side and had a gift for creating beautiful floral arrangements. Henrietta will be remembered by all of her family and friends, especially those at Grand Horizons. She had the incredible ability to sparkle and glow even at age 92. A well refined woman, she was a faithful member of St. Mary's Catholic Parish where God and family were of utmost importance to her.

She was a loving wife to her beloved husband, Don, with whom she spent 69 wonderful years, and a devoted mother to both of her children. In addition to her husband, Donald, she was preceded in death by an infant daughter, Marsha Mae and her son, Donald Pomeday. She is survived by her daughter Lori (Darrell) Redmond; her daughter-in-law, Carol Pomeday; a proud grandmother of Nathan (Heidi) Pomeday, Melissa (Matthew) Littleton, Matthew (Heidi) Redmond, Scott (Kimberly) Redmond; great-grandmother of Alex and Hayden Littleton and Autumn and Parker Redmond.

A Mass of Christian Burial will be held 11:00 AM, Monday, December 22, 2008 at St. Mary Catholic Church, 312 S. State Street, Appleton. Father Michael K. O'Rourke will be the celebrant. A time of visitation and support will be held at the church on Monday, from 10:00 AM until the time of service.

A memorial fund has been established in Henrietta's name.

Henrietta's family would like to thank the staff and her friends at Grand Horizons for taking good care of her and making her happy and laugh. The family also thanks Heartland hospice for their compassionate care.