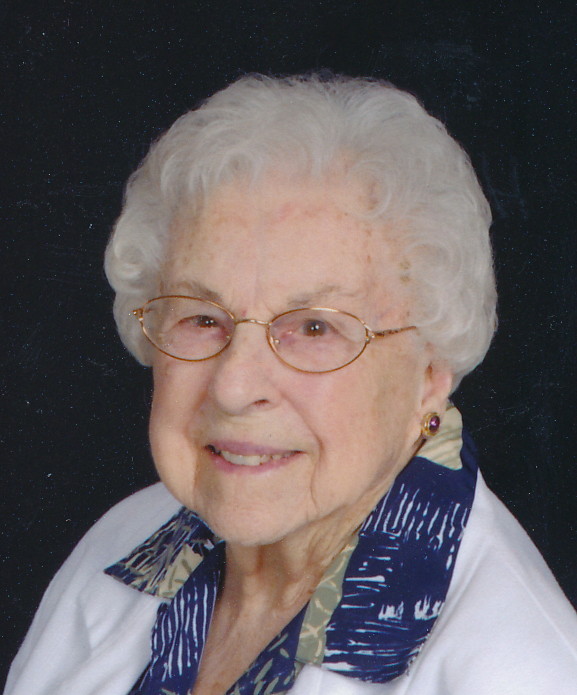 Helen Roehl, age 104, of Appleton, passed away on Friday, April 10, 2015, at Mayflower Assisted Living in Grand Chute. Helen was born on February 6, 1911, in Polar, Wisconsin, to the late William and Lena (Hose) Brandt. Helen moved to Appleton when she was a young girl. She then attended St. Matthew Lutheran's one-classroom school for grades 1-8. During that time she remembered the horse and buggy and hitching posts outside all of the buildings in town.

After the eighth grade Helen helped her mother at home. She started waitressing at a diner by the railroad junction in town. That is where she met her husband, Alvin Roehl. At the age of 19 they went to Illinois and eloped. Through the years they had four children. Not long after WWII, Helen and her husband opened “Roehl's Grocery Store” on North Mason Street in a two-story building where the family lived upstairs. Her children all helped out in the store. Besides working in the store, Helen would get up early in the morning making pies, angel food cakes and potato salad for sale in the store. In the 1950s they closed the store when “Mike's Town and County” opened up across the street. Helen also worked for a while part time in a hair pin factory called “Scolding Locks” and also worked part time at Prange's department store in downtown Appleton selling nylon stockings.

Helen was quite a seamstress and made clothes for her children and others, including wedding dresses. She also made quilts, crocheted and embroidered. Helen was also an avid fisherman, sheepshead player and original member of her woman's card club. In her later years Helen loved to travel and in 1975 even took a safari to Tanzania, East Africa to visit her daughter Shirley and family who were missionaries there at the time. In 2001 she moved in with her daughter, Janice and her husband Dave. During the winter months she traveled with them to Florida. On March 1, 2010, Helen moved into assisted living at Grand Horizon West which is now Mayflower Assisted Living.

Helen was a member of St. Matthew Lutheran Church Ladies Aid for many years and was the oldest member of the church. She had a full and wonderful life. Her goal in life was to always put her family first and to keep them happy and healthy. Behind all of her talents and love of family was her deep faith in God. Helen has truly been an inspiration and role model for us all and a life we can all aspire to live.

Her family would like to thank Patricia Manley and the staff at the Mayflower Assisted Living for their tender and loving care of Helen during her 3-year stay, especially during her last days and hours. They would also like to thank Heartland Hospice for their caring help.

Funeral services for Helen will be at 11:00 a.m. on Saturday, April 18, 2015, at ST. MATTHEW EV. LUTHERAN CHURCH, 129 S. Mason Street, Appleton, with Rev. Paul T. Schuler officiating. Friends may call directly at the church on Saturday from 9:30 a.m. until the time of services. Interment will be in Highland Memorial Park, Appleton. Online condolences may be offered at www.wichmannfargo.com