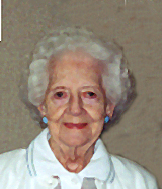 Formerly of Kaukauna, passed away Saturday, March 10, 2001 at a local nursing home. Helen was born in Kaukauna on May 22, 1907, daughter of the late Julius and Lillian (Mulholland) Martens, owners of the former Martens‚Äô Store in Kaukauna. On August 11, 1925, she married Alfred Ristau. He preceded her in death in 1993. Helen was a member of the Kaukauna Hospital Auxiliary and enjoyed reading and playing bridge. She was also a member of the group that founded and opened the Kaukauna Library.

She is survived by her daughter: Mary LaRock of Bloomington, Minnesota; a son: Donald Ristau of Appleton and his special friend Elaine Ven Rooy; two granddaughters: Mara LaRock of Plymouth, Minnesota and Carie (Craig) Allen of Lakeville, Minnesota; a brother: J.J. (Geri) Martens of Kaukauna, and by several nieces and nephews. Helen was preceded in death by her parents, her husband Alfred in 1993, a son David Ristau in 1959, a son-in-law David LaRock in 1995, and a sister Alice (Edward) Young.