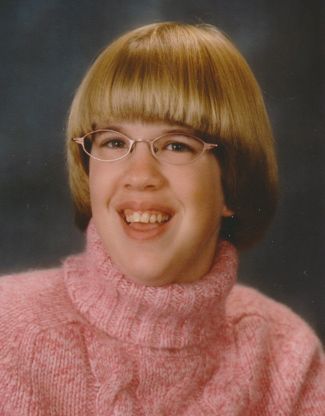 Heidi Ehlert, age 26, passed away on Wednesday, April 16, 2014 after a courageous battle with Sarcoma. She was born October 2, 1987 to Catherine (Stumpf) and the Late Robert Ehlert in Appleton, WI. She attended Hortonville High School, completing her education in 2007. She worked at Valley Packaging until her diagnosis of cancer in January 2013.

Heidi enjoyed participating in Special Olympics Bowling, Swimming, Bocce Ball and Track and Field through the ARC of the Fox Valley, Valley Packaging, and school. She was so happy when she lived 'on her own' in Agape 2 for nearly two years. Heidi also loved spending a week at Camp LuWiSoMo several times. She was a member of Shepherd of the Hills Lutheran Church. Heidi loved to socialize with friends and family, and cherished her special relationship with her niece Lilly.

Heidi was preceded in death by her father, Bob Ehlert; grandparents Norman and Bertha Ehlert and Paul Locke.

The funeral service for Heidi will be held on Tuesday, April 22, 2014 at 11:00 AM at SHEPHERD OF THE HILLS LUTHERAN CHURCH, N1615 Meadowview Dr. Greenville, with Rev Paul Shackel officiating. Interment will be in the Riverside Cemetery. A time of visitation will be held on Monday from 4:00 until 8:00 PM at the Wichmann Funeral Home Tri County Chapel and on Tuesday from 10:00 AM until the time of the service at the church.

Online condolences may be expressed at www.wichmannfargo.com. Memorials can be made in Heidi's name to Special Olympics of the Arc of the Fox Cities, The Cancer Team of Bellin Health Foundation, or Agape of Appleton.

Heidi's step-dad Mike was an integral part of Heidi's care throughout her life and especially throughout her ordeal, and she always depended on him to do what was best for her. In addition, for all the special care and treatment of Heidi over the last 15 months, we'd like to thank Mary from Theda Care Hospice, the Cancer Team at Bellin Health, and Bellin Hospital.