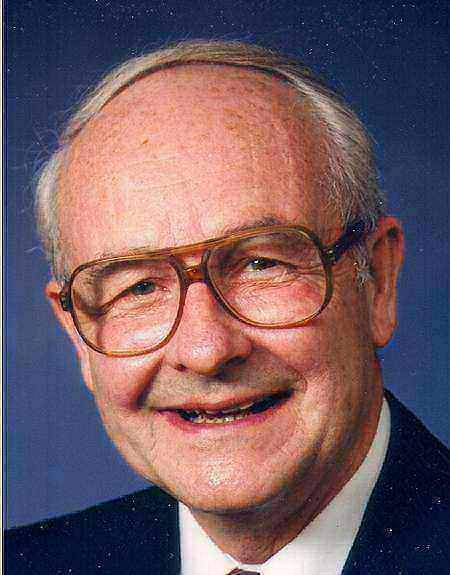 Harry L. Knox, 77, of Appleton, left his earthly life to touch the face of God, Thursday morning, June 9, 2005.
Harry can be best described by saying, ‚Äú He always had a smile on his face‚Äù. No matter how tough things were, he always had a positive attitude accompanied with his smile.
Harry was born December 18, 1927, in Kaukauna, the son of the late Wilbert and Elta (Tubbs) Knox. He married ‚ÄúDee‚Äù Deloris (Slife) Knox, July 15, 1950. He was a member of First English Lutheran Church, Appleton.
He graduated from the Lawrence University Conservatory of Music, with a Bachelor of Music Degree in 1951 and taught both music and English at Wrightstown High School from 1951 ‚Äì 1954. In 1954, he joined the Sales and Marketing Division of Thilmany Pulp and Paper Company, Kaukauna, retiring in 1987 as a product manager after 33 years of service.
Next to his family, his life evolved around his church, his music and the paper industry.
As a youth he was president of his church Youth Group, sang solos at church and other local functions, obtained the Eagle Scout Award in his Boy Scout Troop 20, of Kaukauna. Harry was elected president of both his freshman and senior classes, elected to the National Scholastic Honor Society and as an eighth grader performed trumpet solos accompanied by the high school band during their concerts.
At 16 he played his first professional dance job and from 1944 to 1959 was a member of the American Federation of Musicians Union. During this time he played trumpet with the dance bands of Tom Temple, Lamar Foth, Tony Winter, Harold Janssen, Orv Meltz and the 16-piece Searle Pickett Band. In 1968 he and four other members organized the Winnebago Lake Flies, an 18-piece big band, made up primarily of business and retired local leaders strictly for charitable groups. He was leader of the group for 10 years, retiring due to open-heart surgery. In the mid nineties he played at various nursing homes, again for charity, for five years with the 11-piece Norm Becker Band, serving as manager the last three years after Norm‚Äôs death.
From 1947 ‚Äì 1970 he directed various church choirs, in the valley area, served as Director of Music at Trinity Lutheran Church, Appleton, from 1958 ‚Äì 1970 and was also the director of the Ladies Elks chorus. He was director of the Appleton Woman‚Äôs Chaminade Chorus, from 1960 ‚Äì 1966.
While a member of Trinity Lutheran Church he served on the church council, in the early 60‚Äôs as secretary and trustee and again in the late 90‚Äôs. He was Scoutmaster of the church‚Äôs Boy Scout Troop from 1967 ‚Äì 1971.
Between high school and college he attended a prep school in Severna Park, Maryland, studying advanced mathematics, which qualified him as a tutor in elementary math for Lawrence College. During his senior year, he made the Dean‚Äôs List for scholastic honors.
At Thilmany he was a member of the Management Club and the Quarter Century Club. He was also a member of The Technical Association of the Pulp and Paper Industry (TAPPI). He was chairman of the Packaging Committee and served as chairman, in 1980, of the 700 member Finishing and Converting Division, representing members throughout the world. In 1987 he was presented with the division‚Äôs highest awards, The Thomas W. Busch Division Award and Honorarium, in Grand Rapids, Michigan. He was an instructor in Ream Wrap Packaging at various TAPPI seminars and counseled college students majoring in Paper Science. He was considered by his peers in the paper industry, as one of the foremost authorities on ream wrap and paper mill packaging in the world, presenting papers and monitoring panels at various TAPPI conferences.
Perhaps his greatest honor was to be recognized and listed by Marquis Publishing Company in both their volumes of ‚ÄúWho‚Äôs Who In The Midwest‚Äù and‚Äù Who‚Äôs Who In Finance and Industry‚Äù. He was a past president of the Berry Lake Association and served on the Board of Directors of the National Paraplegic Association.
He was member of the Sherwood Lion Club, serving as its president in 1978 ‚Äì 1979. While at Sherwood he initiated Red Cross CPR training, in the community, teaching classes in CPR to the local citizens.
He was a 50 year member of the Beta Theta Pi. He received his 50 year certificate in 2003 as a member of the Appleton Masonic Lodge #349. He was a member of Royal Arch Masons and a past Patron of the Kaukauna Order of Eastern Star.
Currently he sang in his church choir, was a member of the Appleton Noon Hour Lions Club, also a member of The Paper Industry Oldtimers Club and served on the Board of Directors of the Highland Heights Condominium Association. Survivors include his wife, Dee of 55 years; a daughter, Eileen (Tom) Wuellner, Kaukauna; a son, Scott (Barbara) Knox, Appleton; five grandchildren, Kira and Kendra Wuellner, Brian, Jason and Jennalee Knox; a brother, Robert (Grace) Knox, Orange City, FL. His parents and a sister, Virginia Payne, preceded him in death.
Funeral services for Harry will be held at 11:00 am, Monday, June 13, 2005, at FIRST ENGLISH LUTHERAN CHURCH, corner of Drew and North Streets, with Reverend Vicki Fink officiating. Burial will be in Appleton Highland Memorial Park. The family will receive friends at the funeral home on Sunday, from 4 to 8 pm and on Monday, at the church from 9:00 am, until the time of the service. In lieu of flowers a memorial fund is being established in his name.