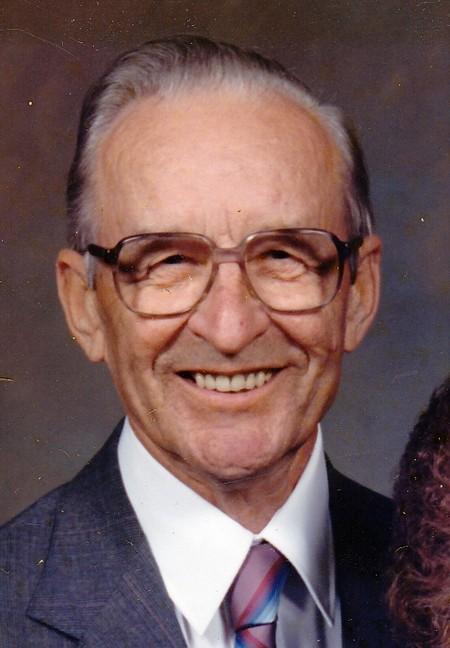 Harry John Van Roy, age 96, passed away peacefully surrounded by his loving family on February 19, 2012. He was born on September 9, 1915 in Wrightstown to John and Mary (Manders) Van Roy. Harry grew up on a farm, attended school through fifth grade, and worked on other farms to help his family during the depression. In 1939 and 1940 he lived in Detroit and worked at Ford Motor Company. In 1940 he purchased a dairy farm in the town of Buchanan from his brother Martin. Harry was united in marriage to Delia Spierings at St John's Catholic Church in Little Chute on May 7, 1942. They raised a family of 10 children. They were members of Holy Angels/Holy Name/Holy Spirit Parish for their entire married life. They enjoyed playing sheephead, traveling, and square dancing. He was a member of the town of Buchanan volunteer fire department and served on the town of Buchanan board as supervisor. After their children were grown, he stopped dairy farming and started to cash crop and to work at Keller Structures doing jobs as welding, flashing, and pouring concrete. Harry enjoyed the many acquaintances and friendships that developed while working at Keller Structures. Later he drove tractor for Bill Van Handel for spring planting, corn picking, and fall plowing. After that, he worked at Goldin Iron & Metal Recycling. At age 90 he fully retired but continued to help his family nurture their gardens and repair items for his children and grandchildren. At age 95 Harry and Delia moved into American Grand Assisted Living Suites. Harry liked to be busy, was thrifty, and had a strong work ethic.

Visitation is on Thursday, February 23, 2012 at 9:30 a.m. at HOLY SPIRIT PARISH, DARBOY which will be followed by Mass at 11:30 a.m. celebrating Harry's life with Father David Beaudry officiating. Burial will follow Mass.

In lieu of flowers, a memorial fund has been established for Holy Spirit Parish.

The family extends a sincere thank you to Karen, Ellen, and Julie of St Paul Hospice and to the staff of American Grand Assisted Living Suites for the care and compassion shown to our Dad.