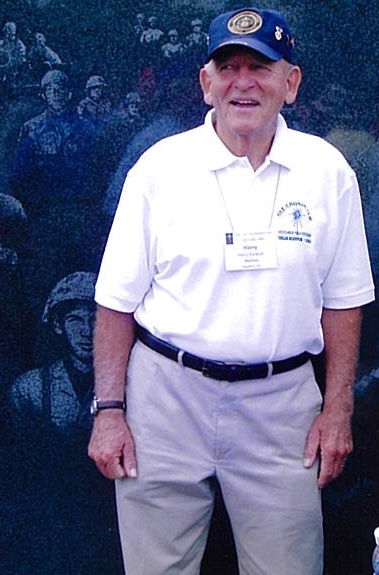 Harry C. Kimball, a golden soul, passed into eternity on August 20, 2018. Harry was the youngest and honored son of the late Ira and Lillian (Bauernfiend) Kimball, born on December 11, 1929. Harry graduated from Appleton High School, Class of 1948 and was proud to refer to his “Triple-Crown Class of 1948.” In August of 1948, Harry, joined by several classmates, decided to enlist in the United States Marine Corps. When the bus backed into Yamisee and all the boy’s Earthly possessions were taken before the famous “Crew Cut,” many of his peers were having second thoughts about their decision. After receiving the Medal of Commendation and the Purple Heart for Service in Korea, Harry spent his last year in Quantico, Virginia, receiving an honorable discharge in 1952. On November 25, Thanksgiving Day, 1954, Harry was united in marriage to Jacquelyn Sorensen. They had 7 children and reared 6 in their Appleton home.
Harry spent his lifetime in the field of construction, primarily in the Fox Cities area, working on hospitals, churches, schools and some home constructions. His specialty was the construction of some 30 fireplaces in and around the Valley. His all-time favorite was the Lounge Fireplace at St. Bernard Catholic Church with his sons, Samuel and Tobin tending him. Work on Macy’s at the Fox River Mall ended his career as a lifetime mason/bricklayer at the age of 62. Harry felt very privileged to be included in the Honor Flight to Washington D.C. on October 17, 2013.
Harry is survived by his children, Jody (Glenn) Sprotte, Tobin (Kris) Kimball, Amy (Russell) Volp, Naomi Harris and Kathryn (Mark) Hinze; grandchildren, Adam Kimball and Ethan (Erin) Kimball, Reece Volp and Samantha Volp, Dru Harris, Ana Harris and Tea Harris, Kyla Hinze and Lilia Hinze; many other relatives and friends.
He was preceded in death by his wife, Jacquelyn; infant daughter Ann Kimball; son, Samuel Kimball; and his 4 siblings.
A funeral mass will be celebrated for Harry at 11 AM on Friday, August 24, 2018 at St. Bernard Catholic Church, 1617 W. Pine St., Appleton, WI 54914 by Rev. Amal Roche. Friends may visit at the church from 9 AM until the time of mass. Full military honors will be rendered following. Inurnment will be at a later date.
Harry’s family would like thank everyone at Misty Arbor Assisted Living, especially Patty and Nancy. In addition, they extend their appreciation to Southern Care Hospice.