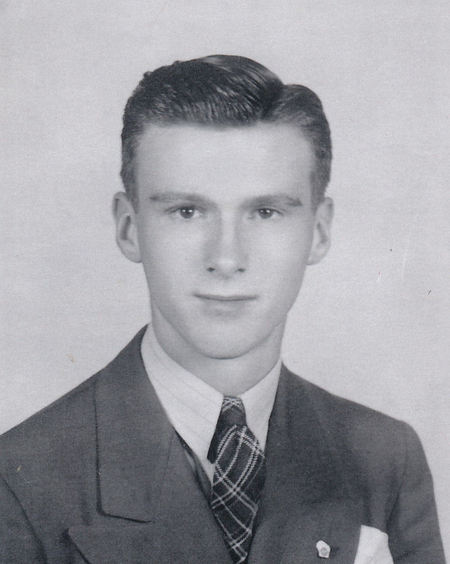 Harold Peter Weiland died on Saturday, October 12, 2013, at Rennes Health Care Center in Appleton, Wisconsin. Harold was born on June 18, 1922, in Appleton, to the late John and Mary Weiland. He graduated from Appleton High School in 1940 and married Mary Geraldine Manning on March 11, 1944. Harold served his country during World War II as a leader of an Army Air Corps support unit in Las Vegas, Nevada.

He was the owner and manager of the Harold Weiland/Fox Cities Insurance Agency for 25 years. Harold served as U.S. Representative Robert Cornell's home secretary and was a broker with Piper, Jaffray and Hopwood. He spent his early retirement lovingly caring for his wife who died of Alzheimer's disease in 2006. Harold continued to volunteer at Rennes Health Care Center following her death.

He is survived by his two children, Cecilia Wiltzius and Jim Weiland; his daughter-in-law, Ellen Weiland; his two grandsons, Sam Wiltzius and Ben (Laura) Weiland. Harold is further survived by five brothers and a sister. A second daughter, Fran Weiland, preceded him in death. All those who knew Harold will miss his calming presence, commitment to family and genuine acts of love.

Contributions to Harold's favorite charities, The Salvation Army and St. Joseph's Food Pantry, would be appreciated. The family is grateful for the compassionate care Harold received from Dr. Deborah Ihde and the staff at Renaissance Assisted Living, and Rennes Nursing and Rehab Center. Memorial services will be in the upcoming weeks. Details will be published in the Appleton Post Crescent.