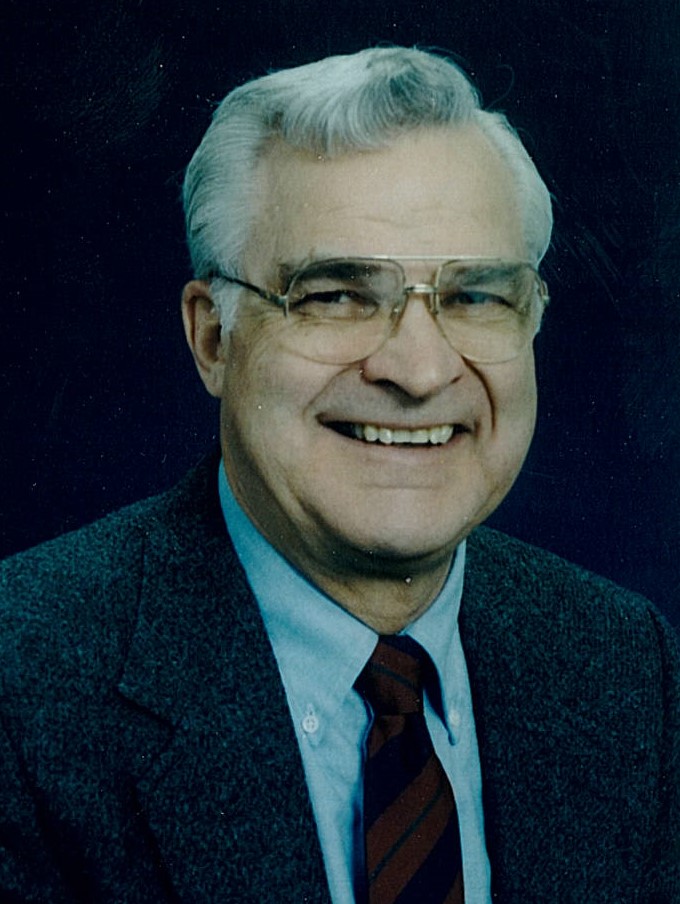 Harold R. Miller was called to join his first and only true love, Doris, in heaven on November 19th , 2021 at the age of 93. Harold passed away peacefully at his home surrounded by his family.
Harold was the true patriarch of the Miller family, always willing to offer guidance on any subject to both his children and his beloved grandchildren as they negotiated though their life experiences. He was a skilled craftsman. Examples of model boats and stained glass abound throughout his home. Harold was most relaxed when he spent time on his boat (for many years a wood Chris Craft), fishing, pulling water skiers and passing on a love of the water to all his family. Later in life he spent many hours cheering at his grand children’s sporting events and doting on his wife Doris until she passed.
Harold’s early years were occupied with high school boxing, boat building (2 built with his friend Ray Zelinski), ten years in the National Guard and Engineering School, graduating in 1951 from the University of Wisconsin – Madison. One of Harold’s proudest achievements was earning his Professional Engineers license which he actively advocated as a goal for both his children and grandchildren as they progressed in their careers.
Harold started his career in 1952 as a Junior Engineer at Marathon Corp. in Menasha. Harold was an entrepreneur before the word was in vogue. In 1966 Harold embarked with four other partners to establish their own successful consulting and design firm; Marathon Engineers / Architects / Planners, Inc. which serviced the pulp and paper industry and had offices in Menasha, Milwaukee, Little Rock AR and Augusta GA. He eventually rose to CEO and Chairman leading the sale of the company to Jaakko Poyry in 1990 which remains today as Poyry Appleton. Harold served on the Board of Directors of many local firms including, MEI Services and Electromeasure Co. which eventually grew into what is now Plexus.
As important as Harold was to his family and businesses, he touched many parts of the Fox Cities community in volunteer leadership positions and through substantial anonymous donational support. He was an active member of St. Mary’s church including many years singing in the church choir. He was involved with Boy Scout Troop 50, cumulating in a memorable trip to Philmont Scout Ranch with his two sons. At the community level Harold spent ten years as the Menasha Police Commissioner. After his retirement he was very proud of his work with two Fox Cities institutions that touched young and old alike, the Paper Discovery Center in Appleton where he served as Director and as Chairmen of Heckrodt Wetland Preserve in Menasha.
Harold is preceded in death by his wife Doris. He is survived by his children, John and Shelley Miller, Paul and Jennifer Miller, Ann and Kurt Rasmussen, Mary Miller. Grandchildren, Molly and Dustin Harry, Ben Miller, Sheridan and Brent Topa, Emily and Sean Nettesheim, Hannah Miller, Bryce Miller, McKenna Miller and Stefan Sorensen. Great-grandchild Brooks Harry.
A mass will be held on Wednesday, Nov. 24, 11:30 AM at St. Mary’s Catholic Church, 528 Second St, Menasha. A visitation will be held prior from 9:30 AM – 11:30 AM.
The family would like to thank the staff and physicians at St. Elizabeth Hospital and Moments Hospice Care for their supportive and compassionate care given to Harold.
In lieu of flowers, donations can be made in Harold’s memory to Heckrodt Nature Preserve, The Paper Discovery Center, or St. Mary’s Schools.