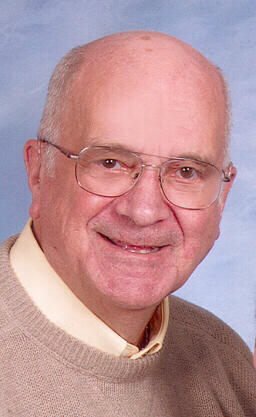 Harold Ervin Guttenberg, age 82, of Appleton, was called home to God on Thursday, June 24, 2010. He was born in Milwaukee Wisconsin on May 25, 1928, to Ervin and Goldie (Schweder) Guttenberg. In 1936, his family moved to Green Bay Wisconsin, where he graduated from Green Bay East High School in 1947. On January 24, 1959, Harold married Evelyn Mae Buckoski.

Harold was an employee of Moore Business Forms in Green Bay, and after moving to Monroe, Wisconsin, became plant manager of the facility located there. During his years in Monroe, Harold was an active member of the Grace Lutheran Church, as well as many other civic groups in the community. He and Evelyn enjoyed many happy times with their family as members of the Starcraft Camping Club. Harold also enjoyed hunting with his friends and sons in Tilleda, at the Wardecke farm, and at his son's cottage in Park Falls. After his retirement in 1990, Harold enjoyed woodworking, camping, hunting, and spending time with his family and nine grandchildren.

Harold and Evelyn moved to Appleton in 1999, where they joined Our Saviour's Lutheran Church. Harold also joined the Waverly Masonic Lodge and attended as his health permitted. During the years in Appleton, they enjoyed spending many times with their campground friends at White Potato Lake. Though recent years caused Harold and Evelyn to give up their travel trailer at the lake, he still enjoyed spending the day at his children's cottages and watching his grandchildren swim and play.

Harold was preceded in death by his parents; his brother: Edwin Guttenberg; and his granddaughter: Liz Guttenberg.

A Celebration of Harold's life will be held at 11:00 AM on Monday, June 29, 2010 at OUR SAVIOUR'S LUTHERAN CHURCH, 3009 North Meade Street in Appleton. Friends may call at the church on Monday from 9:00 AM. until the time of the service. Entombment will be in Highland Memorial Park's Star of Hope Mausoleum in Appleton.