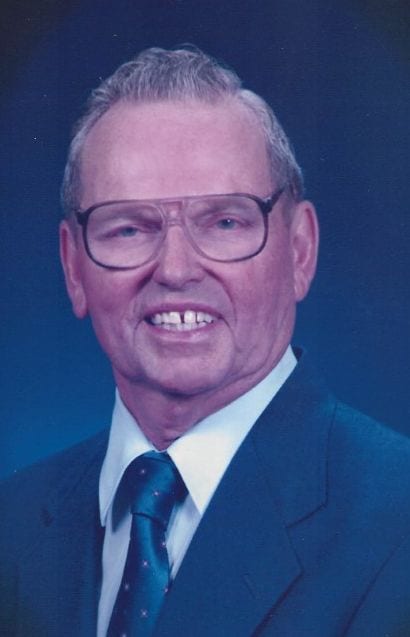 Harold Gilbertson, 93, died Wednesday, November 18,2020, at home surrounded by his loved ones. Harold grew up on a farm in Clark County and graduated from Owen-Withee H.S. He proudly served in the US Army during the Korean War from 1950-52. Harold worked at Mercury Marine in Fond du Lac for 41yrs. He enjoyed square dancing and playing sheepshead; and was a competitive shuffleboard and bocce ball player. Being a charter member of Luther Memorial church of Fond du Lac, he was a man of strong faith.

Harold is survived by Carol, his cherished wife of 38 years, and their eight children: Evlyn, Sandra (Richard), Kathy (Michael), Dan, Cindy (Michael), Sandy, Bill (Gina), and Bob (Michael). Harold is further survived by his sisters, Phyllis and Janet; along with nine grandchildren and six great-grandchildren.

Harold is preceded in death by his parents, Engman and Mabel, his siblings: Howard, Elaine, LeMoine, and Marjorie, Vivian – his infant sister, and infant son, Richard.

Private memorial services will be held Saturday, Nov 21st at Jansen Fargo Funeral Home. The services for Harold can be viewed via livestream on wichmannfuneralhomes.com through his obituary page on Saturday November 21st at 2:00 PM. A family graveside service will be held at a later date. In lieu of flowers, send memorials to Living Hope Lutheran Church, 3100 E Calumet St, Appleton WI.