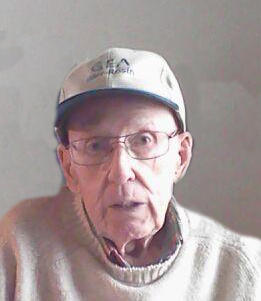 Harold Glinski, age 92, of Kaukauna, passed away on Saturday, July 27, 2013 at American Grand in Kaukauna. He was born on October 9, 1920, in Stevens Point, the son of the late Theodore and Rose (Kulas) Glinski. Harold graduated from P.J. Jacobs High School in Stevens Point. He worked for Lullabye Furniture, and Consolidated Paper Company in Stevens Point. Harold was a member of St. Peters Catholic Church in Stevens Point as a child and young man and belonged to Sacred Heart Catholic Church in Sherwood when they resided in Hilbert. On August 5, 1947, Harold married Eileen Emmer at Sacred Heart Catholic Church in Sherwood. They farmed near Hilbert for eleven years. They moved to Kaukauna and Harold worked at Thilmany Pulp and Paper Company until his retirement in 1986. Since 1959, he has been a member of St. Katharine Drexel Parish.
Harold served in the U.S. Army from November 4, 1942 to November 8, 1945. He served more than 25 months in the C.B.I. (China-Burma-India Theater). Harold drove semi-trucks on the Burma Road. These trucks carried troops, supplies, and equipment for use in China and India. He was a member of the Kaukauna American Legion Post #41.
Harold enjoyed fishing, especially trout fishing. He also enjoyed hunting and was extremely interested in birds. The years spent on the farm were happy ones for him, and many years later after his retirement he loved gardening, especially flowers.
Harold is survived by his children: James (Sandra) Glinski, Greenbrier, Arkansas; Thomas (Kathy) Glinski, New London; and Susan (Karl) Jacob, Midland, Michigan; eight grandchildren: Brian Kalz, Chicago, Illinois; Robert (La Jean) Kalz, California; Jeffrey (Jen) Kalz, Appleton; Christopher (Crystal) Kalz, Conway, Arkansas; James (Stacy) Glinski, Jr., Damascus, Arkansas; Geoffrey (Arielle) Johns, Green Bay; Derek Jacob and Emma Jacob of Midland, Michigan; nine great-grandchildren. He is further survived by nieces, nephews, other relatives, and friends. Harold was preceded in death by his wife, Eileen Glinski; brothers, Florian Glinski, Edward Glinski and Clarence Glinski; a sister, Adeline Glinski along with a great-grandson, David Kalz.
The funeral liturgy for Harold will be held at 11:00 a.m. on Wednesday, July 31, 2013 at St. Katharine Drexel Parish, St. Mary Church, 119 W. Seventh Street in Kaukauna. Father Jerry Pastors will be officiating. Interment will take place at Sacred Heart Catholic Cemetery in Sherwood. A time of visitation will be held at the church on Wednesday from 10:00 a.m. until the time of mass. Online condolences can be offered at www.wichmannfargo.com.