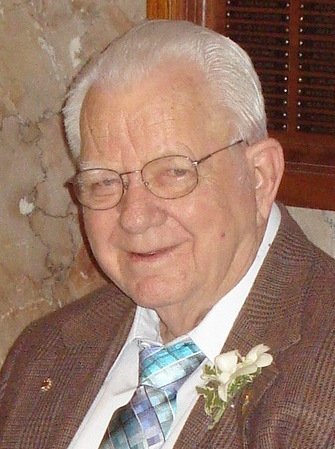 Dale was born on a farm in Wrightstown, Wisconsin and was the youngest of eight children born to Hubert “Al” and Virginia (Milton) Berken. Dale graduated from Wrightstown High School and entered the Army in 1951 serving during the Korean War.

He married Mary K. (Dietzen) Berken on August 19, 1954 and they have joyfully celebrated all 62 years of their precious marriage.

After his discharge from service Dale, held a number of jobs before opening his own business. He was well known for providing coffee and conversation to anyone who stopped in to Berken's Sport Shop in downtown Neenah which operated from 1965 to 1982.

Dale's commitment to his Catholic faith was well-known as he was an active member of St Mary's Parish in Menasha for more than 62 years. He served as an usher and assisted with many projects and events over the years.

He was a well-known member of the Knights of Columbus Council #1838 where he served for many years including multiple terms as Grand Knight and chaired the monthly Fish Fry for decades. He was a 4th Degree member of the organization. Dale was a member of the Veterans of Foreign War and the American Legion Wrightstown Urban Klister Post #436 where he joined his brother's in service to the organization prior to his military discharge.

An inspiration to his family and friends, Dale was known for his quiet countenance and his commitment to family, faith and community. He truly cherished every moment of his life and was grateful for everyday he shared with others. His legacy is carried forward in the strong work ethic and commitment he instilled in his children and grandchildren. His last years were filled with the joy of love and laughter with the birth of two great grandchildren who enjoyed crawling up on his lap and snuggling.