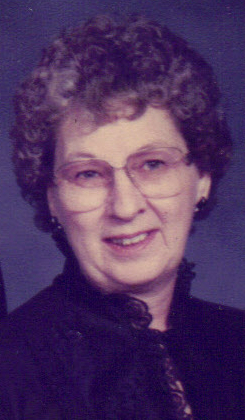 Gweneth M. “Gwen” Kuse, 83, Appleton, passed away on December 14, 2015. Gwen was born on February 5, 1932 in Boaz Wisconsin to the late Louis Halink and Beatrice (Kanable) Halink. After Louis passed away, Gwen's mother married Bill Hankins who became her Dad. She was a graduate of Viola High School in Viola Wisconsin. After graduation, she served her country as a member of the US Army during the Korean War. On October 7, 1950 she married Ervin Kuse Jr., and he preceded her in death in 2006. Gwen's main job was raising her family but she also worked in the lab at Appleton Medical Center. More than anything, she loved time with her family, especially her grandchildren. She loved cooking and baking. She loved making candy, cookies, homemade donuts and other sweets. She also enjoyed reading and watching old movies. In her younger days she enjoyed working with her family to build a retirement home near Montello.

She was preceded in death by her parents Louis Halink and Bill and Beatrice Hankins, Auntie Gweneth, who was like a mother to Gwen and helped raise her, son: Danny Kuse, sister: Camilla (Alan) Russell, brothers: Jay Halink and Laddie (Jeanine) Halink

Memorial Service for Gwen will be at Wichmann Funeral Home, Tri-County Location in Menasha on Thursday, December 17, 2015 at 4:00pm. Visitation will be at the funeral home on Thursday from 3:00pm to 4:00pm. For more information and to express condolences, please visit www.wichmannfargo.com.

The family would like to thank the staff, nurses and CNA's at The Bridges of Appleton, Unit 3. In lieu of flowers, a memorial fund will be established in Gwen's name.