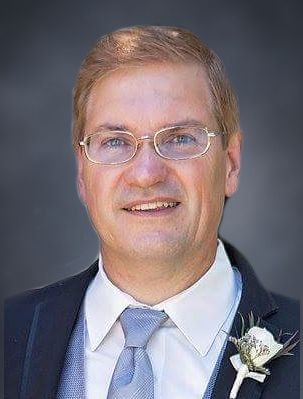 Greg Blank, age 54 of Menasha, passed away unexpectedly, due to a suspected heart attack on Saturday, August 18, 2018, while on business in Alabama. Greg was born in Watertown, Wisconsin on November 16, 1963, the son of Jerold and Joanne (Peirick) Blank. He attended high school in Waupun, and graduated from the University of Wisconsin - Milwaukee with a degree in Electrical Engineering in 1986. On February 7, 1987, Greg married Peggy Denzin at Zion Lutheran Church in South Milwaukee, and their marriage was blessed with four children.

Greg started working as an electrical engineer at McDonnell Douglas in Long Beach, California, working on emergency lighting in airplanes. He returned to the Valley in 1988 and began working at Valmet (Metso) where he had enjoyed a 30-year career as an electrical and automation engineer and winder specialist.

Greg had a strong Catholic faith, which he instilled in each of his children. He was so proud of them and the lives they were creating for themselves. He was an active and faithful member of Sacred Heart Parish in Appleton, where he served as a Eucharistic minister, a member of the Parish Council, Youth Ministry, Catholic Booster Club, and laid the stonework for the Rosary Garden. He loved watching movies, fishing, bowling, golfing, biking and camping. He was quite a handyman and had great attention to detail, making sure he got things right the first time. Greg was also known as the family comedian. He loved working on projects, and as a young man he helped his parents build a home, and later designed his own home. One of Greg’s other loves was travel. He had been to many of the fifty states, as well as Africa, Canada, Venezuela, and Finland.

The funeral liturgy for Greg will be held at 11:00 AM on Saturday, August 25, 2018 at SACRED HEART CATHOLIC CHURCH, 222. E. Fremont Street in Appleton, with Fr. Donald Zuleger officiating. Interment will take place at St. Joseph Cemetery. Family and friends are invited to gather at the Wichmann Funeral Home, 537 N. Superior Street in Appleton on Friday from 4:00 PM until 7:00 PM, and again Saturday morning at the church from 9:00 AM until the time of the service.