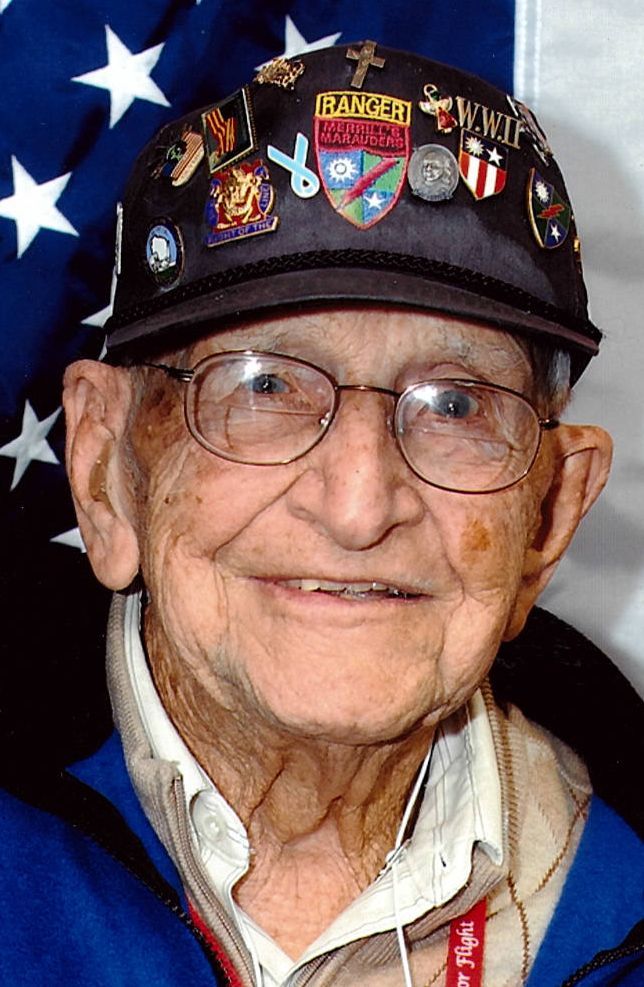 Gregory G. Resch 97 passed away peacefully surrounded by his loving family on March 25, 2017 at Theda Care Regional Medical Center in Neenah, WI. He was born to the late Phillip and Emily (Lorenz) Resch on November 30, 1919. He joined the United States Army in 1940 and served as a Staff-Sargent, first having spent 2.5 years in Panama guarding the Panama Canal, the rest of his 5.5 years of is services as an Army Ranger in the China Berma India theatre with the elite Merrill's Marauders unit. He served in the 5307 Composite Unit code name “Galahad” Red combat team and received many medals including the Bronze Star. He was a life member of Veterans of Foreign Wars. After returning home he worked for the Menasha Police Department for 30 years retiring as a Desk Sargent. He then worked for 8 years at the Menasha Corp., retiring in 1983. He married the love of his life Irene ( Jaskolski) Resch on July 2, 1949 at St. John the Baptist Church in Menasha. They celebrated 68 wonderful years together. He was a wonderful husband and father to their two children Gerard and Kathleen (Tom) Gatza. He spent a lot of his time with is grandchildren Andy and Hailey Gatza.

After retirement Greg and Irene spent a lot of time traveling around the United States. They traveled to numerous Army reunions and he kept in touch with a lot of his Army buddies. He was able to travel on the Honor Flight in October of 2010.

He is survived by his wife Irene of 68 years, his two children; Gerard, of Stone Mountain, Georgia and Kathleen (Thomas) Gatza, Potter, WI. Two grandchildren; Andrew Gatza and Hailey (fiancé Mike Gilbertson) Gatza. Along with many nieces, nephews and cousins.

Military Honors will be performed right after the Mass.