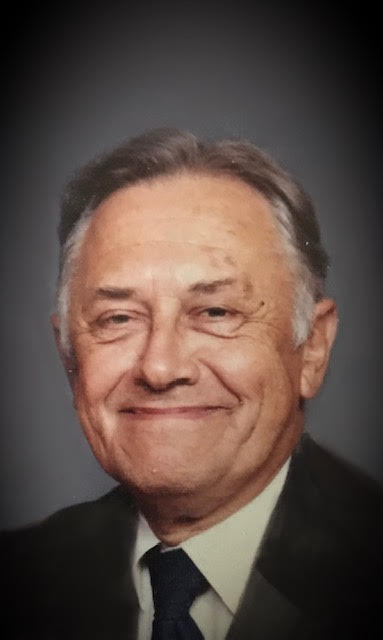 Grayson B. Wood, Jr., age 97, passed away peacefully at his residence at Island Shores, Neenah, WI, with his family by his side on June 3, 2019.

Grayson B. Wood, Jr. was born on July 3, 1921 at Waterbury Hospital in Waterbury, Connecticut. He was the only child of the late Edith (Sperring) and Grayson B. Wood, Sr. During his youth, his family relocated several times, first to the Cincinnati, Ohio area where he attended Wyoming High School, and later to the Chicago area where he attended Oak Park High School in his senior year. Grayson completed his education at Purdue University, graduating in 1942 with a degree in Metallurgical Engineering. Upon graduation, his desire to contribute to the war effort led him to enlist in the Army Air Corps. He was stationed in Gulfport Mississippi, where he was in charge of overseeing the maintenance of a fleet of B-29 bombers. It was here, at a roller skating rink, that he met the love of his life Carolyn Rooks, who was also serving in the military as an Army Air Corps nurse.

They married on August 4, 1944, and relocated to Arizona where their first child, Grayson Wood, III was born. Shortly thereafter Grayson and his new family returned to the Waterbury, Ct area, where he was employed at Scovill Manufacturing. He loved his work as Metallurgical Engineer, and he was highly respected in his profession. In 1979, Grayson retired from Scovill and accepted a position as Director of Research and Development at Chicago Extruded Metals in the Chicago, IL area. He relocated once more in 1983, to Appleton, WI where he was employed by ValleyCast, now LuVata, as Technical Manager. Following his formal retirement from ValleyCast he continued to work for several years as a private consultant.

Grayson and Carolyn were long time members of the Congregational United Church of Christ of Neenah/Menasha, and they enjoyed volunteering in their community. For several years, Grayson and Carolyn provided transportation to seniors through the FISH program in the Fox Valley area, and Grayson volunteered for many years providing outdoor grounds maintenance at their church.

Grayson and Carolyn both lived their lives to the fullest. They had many lifelong friendships and shared many wonderful adventures during their 68 years of marriage. They travelled extensively during their younger years, and shared many interests and hobbies. Grayson was an avid golfer, and over the years he enjoyed many activities including hunting, fishing, downhill skiing, camping, sailing, and woodworking. He was also a competitive bridge player and enjoyed playing in Masters tournaments during his time in the Waterbury area. Grayson also had a love of flying which dated back to his time in the military, and after moving to Chicago he enrolled in pilot instruction to have his pilot’s license reinstated. He and Carolyn enjoyed taking many day and weekend trip in their Cessna airplane.

He was preceded in death by his parents Edith (Sperring) and Grayson B. Wood, Sr.; his beloved wife of nearly 69 years, Carolyn Rooks; two daughters, Sue Raymond and Elaine Wood; and grandson Robert Schuren.

Grayson’s family would like to thank the wonderful staff and dedicated caregivers at Island Shores, Bluestone Physicians and Heartland Hospice for the compassion, kindness and excellent care that they have provided to him. We would also like to thank the residents of this wonderful senior community for their friendship and cheerful companionship. We are so grateful that he was able to call this wonderful senior residence his home.